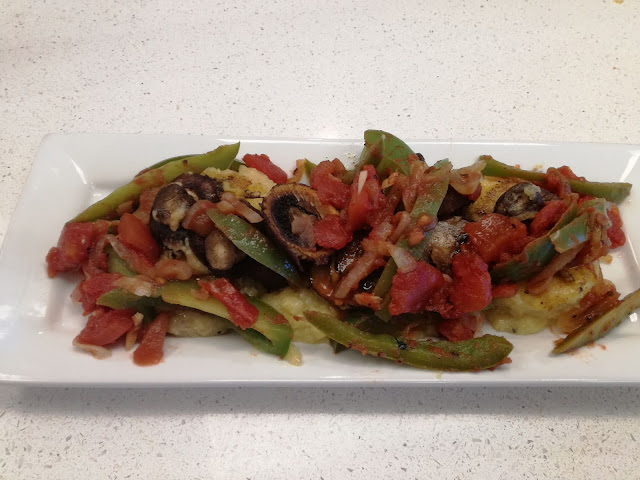 We were serving this with turkey ham and had to do a version for a couple of vegetarians. We chose to use left over polenta as the base and some baby bellas for the umami and texture.

Piperade is a gourmet accompaniment of Basque origin that is usually served with meat and fish. The name comes from biper (Basque chili). There is also a piperade béarnaise. The sauce is prepared in a casserole. These may vary but the spice must not. Green pepper, red pepper (in the French Basque Country, it is generally Espelette pepper), onion and tomato. Piperade can also be prepared as a main dish by adding  an that egg "poaches" and coagulates. The colors reflect the coincidence of colors of Ikurriña (Basque flag): red, green and white.
Piperade is commonly consumed with Bayonne ham or feta cheese and red wine, such as Buzet, Madiran, Irouléguy or a similar wine from this region
Piperade
Serves 4

Heat oil in skillet until almost smoking.  Brown the ham for 1-2 minutes on each side.  Lower heat and slowly cook onions covered for 5 minutes.  Add the peppers cook until tender. Spread pulp over the onions, add garlic and seasonings.  Cover and cook for 5 minutes. Uncover and boil until most of the liquid is evaporated. Place ham in a casserole dish.  Cover the ham with the tomato mixture. Bake covered for 20-30 minutes.

Grease a 9 inch/24cm square pan.
In a large saucepan, cook onion in 6 tablespoons butter until tender. Add milk and bring to a boil over medium high heat. In a small bowl, combine the cornmeal and water, mixing well.
With a fork, stir cornmeal mixture into boiling milk mixture. Reduce heat to medium and cook stirring constantly until mixture is very thick, about 15 minutes. Remove from heat. Stir in parmesan and salt. Spread mixture in greased pan.
Refrigerate 1/2 hour  or put in freezer for 15 minutes until firm, cut into pieces. Spritz with oil and cook on grill pan for 1-2 minutes each side.