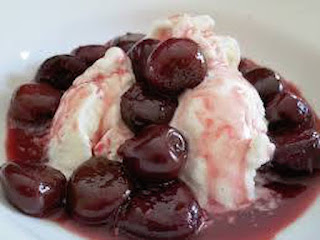 Today is Cherry Dessert Day. In celebration we are going classic with Cherries Jubilee. Cherries jubilee is a dessert dish made with cherries and liqueur (typically Kirschwasser), which is subsequently flambéed, and commonly served as a sauce over vanilla ice cream.
The recipe is generally credited to Auguste Escoffier, who prepared the dish for one of Queen Victoria's Jubilee celebrations, widely thought to be the Diamond Jubilee in 1897
Wash and pit four handfuls (about one pound/450g pitted) the cherries. Put the cherries and 1/2 cup/96g sugar in a large skillet. Peel 2 strips of zest from the lemon in wide strips with a peeler and add to the cherries. Squeeze the juice of half the lemon over the top. Stir to combine evenly. Cover and cook the cherries over medium-low heat until the sugar dissolves, about 4 minutes. Uncover and cook over medium-high until cherries get juicy, about 5 minutes more. 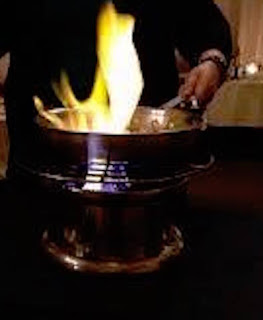 To flambé the rum: If cooking over a gas flame, pull the pan off the heat and add 1/4 cup/60ml rum. Ignite the alcohol with a long match or one held with tongs. Swirl the pan slightly until the flames subside, about 30 seconds.


If cooking over an electric stove, put the rum in a small sauce pan. Warm it over medium-low heat and carefully light it with a long match or one held with tongs. Pour the lit rum over the cherries, and swirl the pan lightly until the flames subside, about 30 seconds.


Ladle the cherries and their juices over prepared ice cream scoops. Serve immediately.
Do you want a Chef to teach you classics in the comfort of your own home? Follow this link for more details. http://bit.ly/YaDaChefCookingClasses