We Were Gifted With A Fresh Caught Butterfly Peacock: Cichla Ocellaris 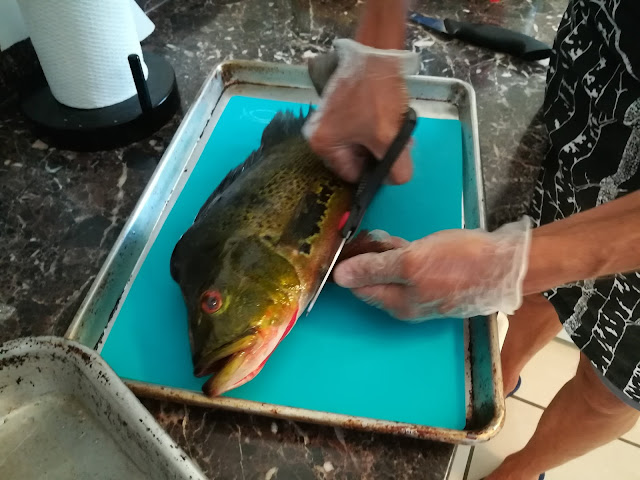 There's nothing better than eating fresh out the water seafood! 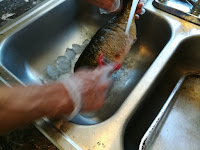 Our neighbor this past weekend offered us an extra Peacock Bass (or also known as a Butterfly Peacock). Below is a bit of information on this Florida nonnative species. If you are in south Florida, you REALLY need to try this delicious fish. It is very dense and exceptionally mild. The usual way to cook them are to saute with butter, garlic and lemon. 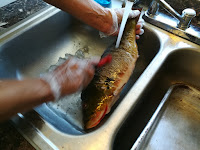 Here's a tip, descale your fish under running water. The helps reduce the flying scales. Another tip is to use a vegetable peeler if you do not have the proper tool. Note, we descaled our Peacock Bass but it was not needed as you filet them and then skin them. Their skin is exceptionally tough and discarded.

Body shape similar to that of a largemouth bass; color highly variable, but generally golden with three black vertical bars that tend to fade and are possibly absent in older fish; black spot with a yellow-gold halo on the caudal fin.

Introduced by FWC in large coastal canals of southeast Florida in 1984; low water temperatures and intolerance of saltwater prevent this species from becoming abundant outside of coastal Miami-Dade and Broward counties. Native range lies within the Amazon River basin of South America.

Spawning Habits: Typically spawn from April through September with a peak in May and June; both adults prepare a flat, hard surface near shore, then lay between 4,000 and 10,000 eggs; young are guarded by both parents, sometimes for several months; males commonly develop a 'nucchal' hump on foreheads when reproductively active.
Feeding Habits: Feed almost exclusively on fish; tend to use great speed to capture prey; typically feeds only during daylight hours; this fish has helped reduce the number of undesirable exotic fishes, especially the spotted tilapia.

Grow rapidly to 12-14 inches during the first 16-18 months, after which they become much heavier with each inch they add in length. A 17-inch fish will weigh approximately three pounds while a 19-inch fish will weigh up to five pounds. The largest butterfly peacock caught in Florida weighed 12.0 pounds and measured 25.5 inches, but this fish was not submitted for a state record. It is not known how long they live, but preliminary data suggests about six years.

One of the most popular sportfish in southeast Florida canals where it generates millions of hours of fishing pleasure for thousands of anglers who spend more than $8 million a year to catch them; available to both boat and bank anglers using the same basic tackle as largemouth bass anglers; small shiners are the preferred live bait; rarely take plastic worms like largemouth bass do, but top-water lures, minnow imitating crank and jerk baits, and marabou jigs are popular artificial baits; streamers, epoxy minnows and pencil poppers are favorites of fly fishers; daily bag limit of two fish, only one of which can be greater than 17 inches.

Good but the real value of this fish is in its use for controlling over-abundant exotic forage fishes and its sporting qualities; therefore FWC encourages anglers to catch and release these fish, especially those longer than 14 inches.

State record: 9.08 pounds, but fish up to 12 pounds have been caught; current IGFA all-tackle world record is 12.6 pounds (caught in Venezuela); 13 of the 16 current IGFA world records caught from Florida waters
http://myfwc.com/wildlifehabitats/profiles/freshwater/nonnatives/butterfly-peacock/