What Is That White String in Chicken Tenders? Plus, Is It Safe to Eat and How to Easily Remove It 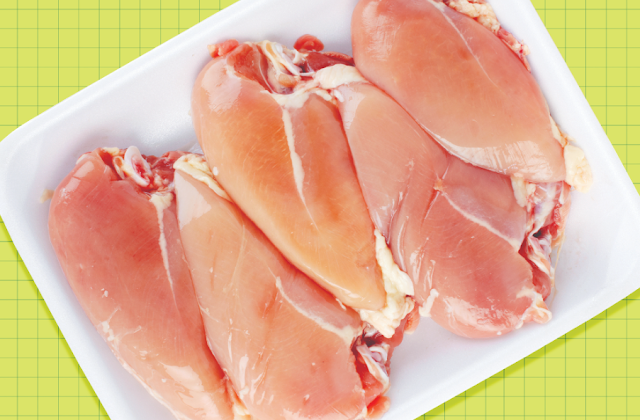 Chicken strips, chicken tenders, chicken fingers—whatever you call them, they are one of the most popular foods eaten in American households. Anyone who has ever prepared chicken at home has seen that white, string-like piece hanging from the chicken tender portion of the breast. So, what is it? Read on to find out, plus learn what, if anything, you should do about it.

Chicken is one of the healthiest protein choices you can make when deciding what to cook for dinner. And chicken breast boasts great flavor with minimal internal fat, making it low in calories and still high in protein. But if you have not worked with chicken a lot, you might notice while prepping that there is a white stringy thing in the chicken breast. And you may wonder if you should remove it or if it is safe to eat.

Related: Are Chicken Thighs Healthy? Here's What a Dietitian Has to Say

What is that white string in the chicken breast and is it ok to eat?

The white string you see in your chicken is just a tendon. The tendon is connective tissue that helps the muscles attach to the bones, just like the tendons we have! It is entirely edible and not dangerous to consume, but it can get a bit tough or rubbery when cooked, so it is up to you whether you want to remove it or not when prepping your chicken.

What part of the chicken is the tender?

Some people think that chicken tenders are just strips cut from the breast of the chicken. But in fact, the tender or tenderloin is an independent secondary muscle that lies directly under the breast. Sometimes the whole breast is removed, which includes the tender; sometimes they are removed separately. The tender contains the visible portion fo the tendon that looks like a string.

Related: Is Rotisserie Chicken Healthy? Here's What a Dietitian Says

The tendon in chicken breast meat runs down the center of the tender and can be removed whether you are leaving the tender attached to the breast or not. To remove the tendon:

Alternatively, you may also place the tendon between the tines of a fork, grip the the tendon with a paper towel, and slowly pull it out of the chicken while pushing the fork downward, opposite to the direction you're pulling the tendon. The tendon will slide right out, as seen in this viral TikTok video from @raerae738 (we tried it too, and it worked!).

Do I have to remove the tendon from chicken?

You do not need to remove the tendon from the chicken. The tendon is perfectly edible and not at all dangerous. Removing the tendon is often either an aesthetic decision or done because tendons can be tough and rubbery when cooked.

What happens to a tendon when the chicken cooks?

Tendons are essentially like straps that attach muscle to the bones of the chicken. This connective tissue is very strong. When you cook it, the tendon firms up and contracts, making it slightly tougher than the surrounding meat, which is why some chefs choose to remove it before cooking. For home cooks, it can often be easier to simply eat around the tendon or remove it after cooking.

If you love chicken breasts, but hate that rubbery band, it isn't hard to learn to remove it before cooking. But if it doesn't bother you, you can be assured that it's not dangerous to eat! Feel like chicken tonight? Try these delicious Mediterranean Stuffed Chicken Breasts or this flavorful recipe for Chimichurri Chicken.