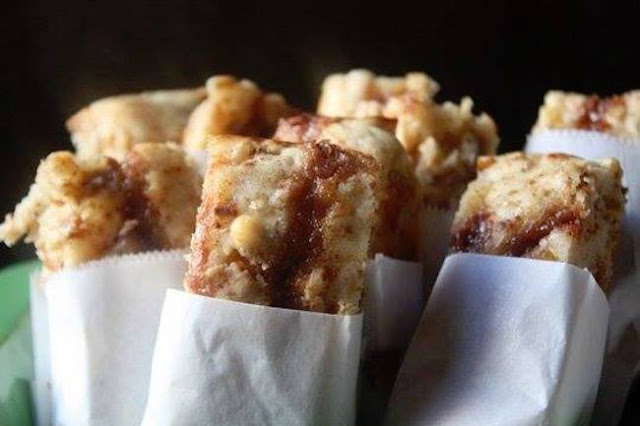 Have you ever mixed up a batch of pancake batter, (because they sounded so amazing 15 minutes earlier when you were in bed), only to find yourself in front of the stove, spatula in hand, thinking "I really don't have the patience for this?"
Yields: 20 Bars
Adapted from: Martha Stewart's Buttermilk Pancakes
2 cups all-purpose flour
2 teaspoons baking powder
1 teaspoon baking soda
1/2 teaspoon kosher salt, or slightly less table salt
3 tablespoons sugar
2 large eggs, lightly beaten
2 3/4 cups buttermilk (whole milk can be substituted without any problems)
3 tablespoons unsalted butter, melted
1 small apple, diced into 1/2" pieces
2 cups Granola (we used an apple cinnamon granola from Bear Naked)
For Topping:
1/4 cup all-purpose flour
1/4 cup brown sugar, firmly packed
3 tablespoons butter, melted
1 teaspoon cinnamon
1/2 teaspoon freshly grated nutmeg
Grease and Parchment your choice of baking dish. We used 2 8"x8" pans (for the straight sides), but a large pyrex baking dish should work just fine! Set aside. Mix dry ingredients and stir with a wire whisk. Add wet ingredients and stir until just barely combined. Add in Granola and apples, stirring just until coated. You want your batter to be lumpy with out any dry spots.
Pour into prepared pans. Preheat oven to 400 degrees Fahrenheit. Allow batter to rest in pans while oven is coming to temperature and mix Streusel topping ingredients in a small bowl. Drizzle over pancake mixture with a fork, or spoon into a zip top bag and use like a pastry bag, making thin, even lines. Bake for 12-15 minutes, when touched, it should spring back gently. Remove from oven and remove from pan (thanks parchment paper!) and place on wire rack to cool slightly. If you wish, brush tops with 2 more tablespoons of melted butter for a great shine.
These are great eaten the morning of, or as you have need throughout the week. You can also wrap individual portions and freeze them. Just take them out the night before, (or if you forget, pop them in the microwave to defrost) and let them sit on the counter so your breakfast is ready as you bolt out the door!
They're great for a brunch where people might find themselves eating away from the table, serve them with a little lemon curd, apple butter, or small amount of maple syrup! Enjoy!