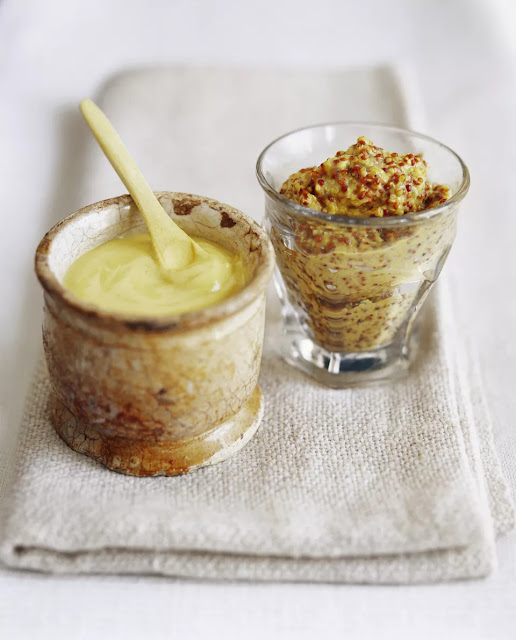 Mustard was around thousands of years before Grey Poupon

BY PEGGY TROWBRIDGE FILIPPONE
Mustard, a member of the Brassica family of plants, bears tiny round edible seeds and tasty leaves. Its English name, mustard, is derived from a contraction of the Latin mustum ardens meaning "burning must." This is a reference to the spicy heat of the crushed mustard seeds and the French practice of mixing the ground seeds with must, the young, unfermented juice of wine grapes.
The condiment mustard is made from the seeds of the mustard plant.
The seeds aren't flavorful until they are cracked, after which they are mixed with a liquid to become prepared mustard. The culinary history of mustard as a condiment is extensive.

History of Mustard as a Condiment

As a condiment, mustard is ancient. Prepared mustard dates back thousands of years to the early Romans, who used to grind mustard seeds and mix them with wine into a paste not much different from the prepared mustards we know today. The spice was popular in Europe before the time of the Asian spice trade. It was popular long before pepper.
The Romans took the mustard seed to Gaul, where it was planted in vineyards along with the grapes. It soon became a popular condiment. French monasteries cultivated and sold mustard as early as the ninth century, and the condiment was for sale in Paris by the 13th century.
In the 1770s, mustard took a modern turn when Maurice Grey and Antoine Poupon introduced the world to Grey Poupon Dijon mustard.
Their original store still can be seen in downtown Dijon.
In 1866, Jeremiah Colman, founder of Colman's Mustard of England, was appointed as mustard-maker to Queen Victoria. Colman perfected the technique of grinding mustard seeds into a fine powder without creating the heat which brings out the oil.
The oil must not be exposed or the flavor evaporates with the oil.

There are about 40 species of mustard plants. The three species that are used to make mustard are the black, brown and white mustards. White mustard, which originated in the Mediterranean, is the antecedent of the bright yellow hot dog mustard we are all familiar with. Brown mustard from the Himalayas is familiar as Chinese restaurant mustard, and it serves as the base for most European and American mustards. Black mustard originated in the Middle East and in Asia Minor, where it is still popular. Edible mustard greens are a different species of mustard. The history of cultivation of mustard centers on the seeds, not the greens, which have been credited with originating both in China and Japan.

Long ago, mustard was considered a medicinal plant rather than a culinary one. In the sixth century B.C., Greek scientist Pythagoras used mustard as a remedy for scorpion stings. A hundred years later, Hippocrates used mustard in medicines and poultices. Mustard plasters were applied to treat toothaches and a number of other ailments.

The mustard seed is a prominent reference for those of the Christian faith, exemplifying something that is small and insignificant, which when planted, grows in strength and power.
Pope John XII was so fond of mustard that he created a new Vatican position—grand moutardier du pape (mustard-maker to the pope—and promptly filled the post with his nephew. His nephew was from the Dijon region, which soon became the mustard center of the world.

We all know that losers and quitters can't cut the mustard (live up to the challenge), and perhaps the reason ballpark mustard is so popular is because pitchers apply mustard to their fastballs to get those strikeouts. The disabling and even lethal chemical weapon known as mustard gas is a synthetic copy based on the volatile nature of mustard oils.
https://www.thespruce.com/history-of-mustard-as-food-1807631

Yes that’s right!  Wine! These go great with a sharp cheese, such as Feta and Blue.  You can swap the wine and pair it with whatever cheese you normally would.  Serves 6 2 ¼ cups/570ml Manischewitz Concord Grape Red Wine ¼ ounce/7g packet of powdered gelatin Pour wine in a medium saucepan.  Sprinkle the gelatin over and stir in.  Place it on a medium low burner and stir constantly for 1-2 minutes.  Ladle equal amounts into 4 custard cups.  Place in the fridge to set.  personal chefs and event catering Miami + Miami Beach + Fort Lauderdale + Palm Beach info@yadachef.com | 954-367-YADA (9232) www.yadachef.com
Read more

A natural and simple homemade ketchup recipe that kids love. Ketchup is one of the most kid-friendly foods out there, and some kids will eat anything with ketchup on it.  Whip up a batch of ketchup in your kitchen and avoid harmful ingredients.   Serves: 8+ Ingredients 18oz/510g organic tomato paste  ½ cup/125ml apple cider vinegar 1 teaspoon/4ml garlic powder  1 tablespoon/15ml onion powder 2 tablespoons/30ml raw honey  2 tablespoons/30ml molasses 1 teaspoon/5ml Sea Salt 1 teaspoon/5ml dried mustard powder A pinch of each of the following (to taste): Cinnamon, cloves, all-spice, cayenne 1 cup/250ml of water Optional: 1 teaspoon/5ml powdered chia seeds (powder in food processor or blender) for thickness Instructions Put the ingredients in a blender or food processor and blend well. Put in fridge to let flavors meld overnight or at least two hours personal chefs and event catering Miami + Miami Beach + Fort Lauderdale + Palm Beach www.y
Read more

Here is a great cleanse drink that tastes good. Apples Cinnamon and Water---Here's how to make it. It's a pretty common idea that if you want to improve your diet and eating habits, you should cut out caloric beverages. Drinking calories makes it far too easy to lose track of what you're really consuming, and when we've been doing it for years it can be hard to consider what a big difference cutting it out could make. This water recipe will help clean up your system and even help your body burn calories more efficiently. That old rule "the more water you drink, the less you retain" is absolutely right, and drinking this apple cinnamon water will speed up the process of cutting water weight. Ingredients: 2 apples 2 cinnamon sticks 1 liter of water Cut apples into thin slices and place in a large jar or bottle with a wide opening. Add cinnamon sticks and put the water. Thus prepared water let it stand for at least one day. In the water you can add or fresh l
Read more

This amazing ice cream cookie san dwich has no dairy and no added sugar. It contains just two simple, healthy ingredients that combine to make a delicious frozen treat.  Makes 2 ice cream cookie sandwiches. Dice 1 banana and freeze for a few hours or overnight.  Preheat oven to 350F/175C/Gas 4 Place oats into a food processor and grind into oat flour.  Pour oat flour into a bowl and mash with the second banana until a dough forms.  Make 4 cookies and place them on a parchment lined baking pan and bake for 12-15 minutes.  Allow cookies to cool completely Place frozen banana pieces in the food processor and blend for 1-2 min until it forms a cream.  Scoop cream onto cookie, sandwich it and enjoy For an even better ice cream cookie, add mini-chocolate chips at your process the frozen bananas pieces in the food processor for your ‘ice cream’.  personal chefs and event catering Miami + Miami Beach + Fort Lauderdale + Palm Beach www.yadachef.com
Read more

What do you do when you accidentally bought chocolate stout instead of the beer you thought you were buying?  Cook with it.  You can make this totally GF by substituting the flour for corn starch/flour.   Serves 6 3 eggs, sub 3 tablespoons/45ml ground flax seed with 9 tablespoons/135ml water 1/3 cup/45 grams all-purpose flour (sub 5 tablespoons/22g cornstarch/flour) 1/2 cup/115g  golden or light brown  sugar 1/8 teaspoon/.5ml salt 1 cup chocolate stout 1 1/2 cups/360ml almond milk 4 tablespoons/30g unsweetened baking cocoa 1 teaspoon/5ml pure vanilla extract 3/4 cup/6 ounces/170g semi sweet dairy free chocolate chips ( you can double this if you want) In a large mixing bowl, combine eggs, flour, sugar and salt. Whisk until smooth.. In a saucepan over medium high heat, combine Guinness, almond milk and baking cocoa. Heat until the mixture is steaming and little bubbles are beginning to form around the edges. . Remove from heat. Slowly drizzle in the milk mixture to the eggs.  Make sure
Read more

Ingredients and Equipment (per 9 inch deep dish pie) 3 Tablespoons/45ml cornstarch (in England it's called "corn flour") (arrowroot starch or mini-ball tapioca can be used instead of the corn starch, in the same quantity) 2 cups/200g rhubarb 2 cups/400g strawberries 6 Tablespoons/47g flour 1 and 1/2 cups/292g (1.5 cups) granulated sugar (ordinary table, organic, raw or even the same amount of honey) OR for those on sugar-restricted diets: 3/4 cup sugar and 3/4 cup Stevia (or if you prefer, Splenda) works in pie recipes, but not by itself. The pie turns out heavy and with much less flavor; you can do it, if you must, but the results aren't as good). 1/2 teaspoon/2ml natural vanilla extract 1 teaspoon/5ml grated orange zest 9 inch/23 x 3 cm pie graham cracker crust (grocery stores sell both disposable pie pans and glass pans. Get the deep dish type! If you'd rather make your own (they are MUCH better homemade). Step 1- Wash the rhubarb and strawb
Read more

Factories around the country have closed due to COVID-19 outbreaks, but the government is promising things will be back to normal within weeks. By  Mike Pomranz   May 07, 2020 Food is essential; everyone ( almost ) can agree on that. But without a family farm, the vast majority of Americans require other people to supply that food—meaning these workers could be considered  as essential as the food itself . But is meat, specifically, essential? And should hundreds of Americans be putting their health at risk so that other Americans can eat meat? As coronavirus continues to plague the country, the answer has proved surprisingly difficult. Some things are certain: America’s meat supply is under pressure. Across the country, COVID-19 has  shut down processing plants  due to staff illnesses, leading grocers  to limit meat purchases  and leaving at least one major fast food chain, Wendy’s, with burger shortages. Another certainty: The executive branch wants this resolved quickly. On April 28
Read more