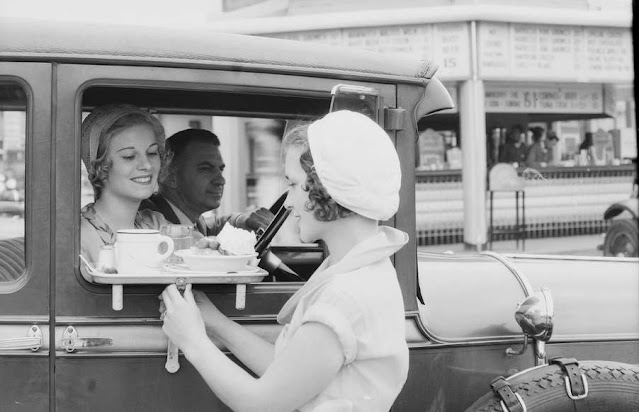 Dining out got a new look in 1948, thanks to a 100-square foot burger shack perched next to a circular Baldwin Park, California, driveway. There, five cooks worked behind glass walls assembling take-out meals for motorists, lured by the a sign assuring “NO DELAY” and a restaurant name that promised exactly what it delivered: In-N-Out.

There are a few claimants for the first fast food eatery to feature a true drive-thru, but In-N-Out Burger’s first restaurant, with its intercom ordering system and its lack of both inside seating and outside parking was likely the first to offer the complete drive-thru package.

Where Did Drive-Thru Dining Begin?

Before the drive-thru, though, came the drive-in, a type of restaurant where customers ate their meals on the premises without leaving their cars. The drive-in concept was first popularized by a Texas chain of eateries called the Pig Stand, whose first drive-in opened on a highway connecting Dallas and Fort Worth in 1921. Customers would pull in to the parking lot and be immediately greeted by carhops, combination waiter-busboys who served burgers and fries on trays that clipped on to the car’s window. In 1931 a Los Angeles franchisee of the chain, Pig Stand Number 21, began to allow car owners to order and receive bagged meals from a single window (it’s not clear whether they had to get out of their cars).
The drive-in was less a pure novelty than an expression of great American passions that go hand in hand: speed, efficiency and, sometimes, laziness. By indulging their patrons’ desire not to leave their cars, restaurateurs could operate with fewer employees, letting prices fall while profits rose. But the car-bound diners wanted quick service, prompting an arms race among the carhops to take orders and shuttle food as quickly as possible (hence the roller-skating carhops featured at many drive-ins). By mid-century drive-in owners were experimenting with systems like Aut-O-Hop, Dine-a-Mike, Electro-Hop, Fon-A-Chef and Ordaphone, all allowing parked customers to call in their orders.

Despite In-N-Out’s success with a drive-thru-centric business plan, the largest national chains were slow to adopt the model. The first McDonald’s burger stands opened in 1948, serving 10-cent burgers from walk-up windows (the pedestrian equivalent of the drive-thru) but it wasn’t until the mid-1970s that the first McDonald’s drive-thru opened up. However, smaller chains, like Jack-in-the-Box (founded in 1950) and Wendy’s (1969), adopted the drive-thru early on and by the mid-1960s the Wienerschnitzel chain was opening A-frame restaurants with a car-sized hole that ran straight through the building.

Drive-thrus changed the types of food that quick-service restaurants offered, ensuring the supremacy of the hamburger while spurring the invention of drip-free tacos and boneless morsels of fried chicken. The drive-thru changed cars as well. Cup holders were once a rarity in auto interior design, but by the late 1980s it was common for cars to feature more cup holders than passengers.