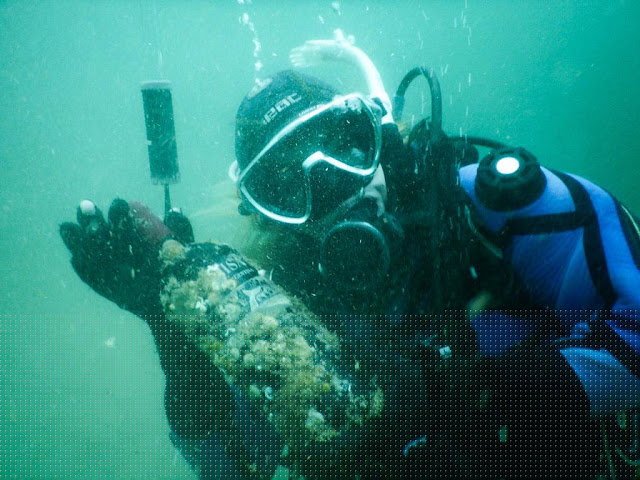 An Argentinian winery compared bottles of the same wine aged under the sea versus in the cellar head-to-head.
By Mike Pomranz
Once seen as a winemaking novelty—or something that happens because your ship sank and you didn't have any other choice—aging wine underwater may be heading towards the mainstream. A winery in Argentina has announced the results of their oceanic aging experiment, and the difference between the sea wine and the control bottles has been billed as "stunning."

The Rio Negro-based winery Wapisa—part of Bodega Tapiz—initially announced its "coastal terroir" initiative this time last year, according to Decanter, submerging 1,500 magnums of their 2017 Malbec-blend at a mix of depths between about 20 feet and 50 feet underwater in the Atlantic Ocean off the coast of Las Grutas. After nine months of lounging about at sea, these bottles were then brought ashore and taste-tested alongside identical bottles that had been forced to vacation in a boring old cellar.
"We were curious to explore if underwater ageing could actually allow us to have young wines with the benefit of maturity," winery founder Patricia Ortiz was quoted as saying. "We tasted the underwater-aged wine and the cellar-aged counterparts blind, the difference was stunning: the former was rounder, more elegant and with fresher fruit."
In theory, underwater ocean aging offers a consistent low temperature and additional pressure to create a different aging experience with Wapisa's website suggesting, "Popular science states that three years of aging in a cellar are equivalent to one year underwater."  But regardless of the science, this technique offers a marketing opportunity as well: Ortiz said the winery's next move is to age another group of bottles in new-and-improved underwater cages, and then they will reportedly sell these bottles alongside others, encouraging consumers to taste the difference.
Meanwhile, perhaps proving that underwater aging is a growing trend, Decanter points out that the first Underwater Wine Congress was held in 2019. It must have been popular enough to warrant a second one: The event's website states that will be held in Spain this year.
FOOD&WINE