Kedgeree, It’s As Easy As One, Two Three 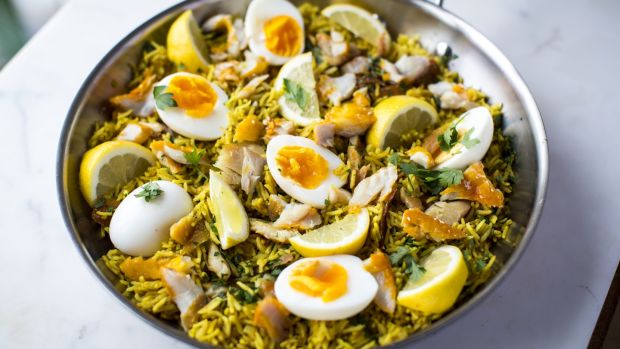 We are in the beginning of the party season and to that end I thought it would be appropriate and helpful to resurrect a popular dish from the days of the British Raj. There is some disagreement of where the dish originated. The most popular of theories is Kedgeree originated with an Indian rice-and-bean or rice-and-lentil dish Khichri from 1340 or earlier. It is believed that the dish was brought to the England by returning British colonials who had enjoyed it in India and introduced it as a breakfast dish. Anglo-Indian cuisine was all the rage in Victorian times. The other thought is that the Malcom Clan invented it 1790, took the recipe to India adapted it with local ingredients where it was embraced by the Indians and indeed the English colonels. In any case it is the perfect dish that can be made in 30 minutes is GREAT for an impromptu late night/early morning get together after the theater or opera. It is a wonderful brunch item or even a hearty supper.
Originally when the dish was brought back to the UK lentils were the protein. They were taken out perhaps because they were not readily available and eggs were added.
What is this dish you ask? Kedgeree is a wonderful dish of rice, smoked fish (usually haddock, onion and eggs all mixed together with with Indian spices, butter and cream...if you are feeling naughty. The bold warm spices, the smoky fish and the creamy egg yolk are surprisingly rich and filling.
Imagine yourself in a tuxedo or ball gown chattering away about the affairs of the day. Wash it down with a cool ale or light and crisp white wine.
serves 4
1 pound/405 g smoked haddock
1 1/2 cups/375ml white long grain rice
1 onion, diced
4 ounces/115g butter
1 teaspoon/5ml garam masala
1/2 teaspoon/2ml turmeric, or a pinch of saffron threads
4 boiled eggs, 2 chopped , 2 cut in half
1 1/2 cups/375ml heavy cream
1 teaspoon/5ml salt
1 teaspoon/5ml black pepper
handful of chopped parsley
Place the haddock in a pan, cover with water and bring to a simmer for 10 minutes. Remove the haddock and reserve the water. Bring the fish cooking water to a boil add the salt and rice. Bring back to a boil, cover and lower the heat to low. Cook for 16 minutes. Shut off heat and uncover. Remove the skin and bones from the fish. Break the fish into bite size pieces and set aside. In a large skillet melt the butter, add onion, garam masala and turmeric. Saute the onions for 3-4 minutes on medium heat until soft. Fluff the rice and add it to the onion mixture. Gently toss to mix well(add the cream - optional), chopped eggs and flaked fish. Season with black pepper. Fold to combine. Arrange on a platter with egg halves and a sprinkle of parsley.
personal chefs and event catering
Miami + Miami Beach + Fort Lauderdale + Palm Beach
info@yadachef.com | 954-367-YADA (9232)
www.yadachef.com