Disney Is Selling Sporks At Star Wars: Galaxy's Edge For $11 After People Kept Stealing Them

Are you happy now?? 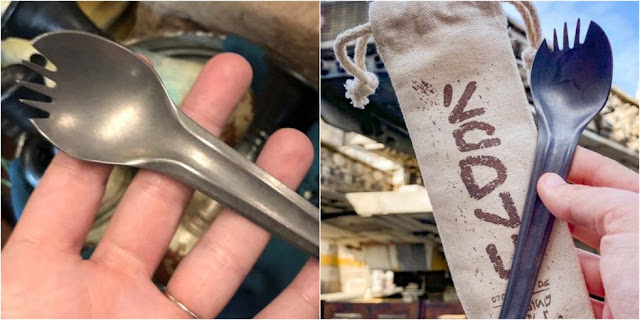 Despite their genius nature, sporks aren’t something you regularly see on tables. So, it’s only natural that people get really, really excited when they happen to spot one in the wild.
Apparently, some people visiting Disneyland have been so pumped about spotting the super special sporks at the Docking Bay 7 restaurant in Star Wars: Galaxy’s Edge that they’ve kinda-sorta-totally stolen them. Disneyland caught wind of this after people posted on social media about their loot, and, after a few months, they decided to actually put them up for sale, per CNN.
If you happen to visit the Docking Bay 7 restaurant, you’ll have the option of purchasing your own spork (with a Galaxy's Edge-themed travel bag!) for $10.99—it’s right on the menu. At nearly $11, the spork is nearly double the cost of the next-most expensive menu item (Rising Moon Overnight Oats made with yogurt, oats, fruit, and “popping pearls” for $6.99 comes in second place, in case you were wondering), but it's a one-of-a-kind, intergalactic utensil, you guys!
Seriously, though: Spork theft has been a serious problem at the Docking Bay 7 restaurant. According to the Disney Food Blog, the metal sporks were yanked not long after the restaurant opened. Now, they’re back—just not for regular dining purposes. If you want to get your spork on at Docking Bay 7, you actually have to pony up the cash first.
As of right now, these aren't available in Disney World but keep your eyes peeled as they could be rolling out soon. Stay vigilant!
KORIN MILLERKorin Miller is a freelance writer specializing in general wellness, sexual health and relationships, and lifestyle trends, with work appearing in Men’s Health, Women’s Health, Self, Glamour, and more.
delish