YOU ARE WHAT YOU DRINK...The debate over childhood obesity and flavored milk 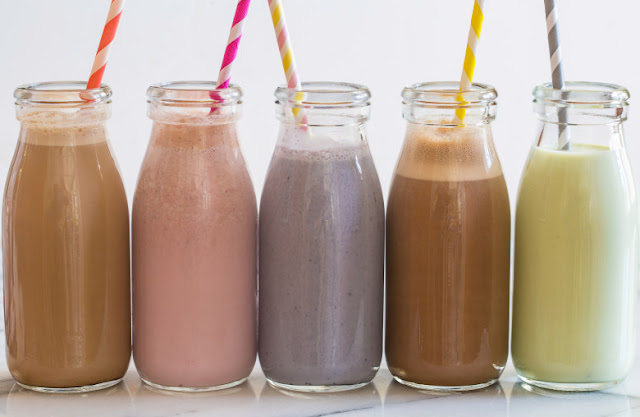 Here are some chilling facts on the next generation:

There has been an ongoing debate about the benefits and the detriments of flavored milk.  Most schools now serve either 2% or skim (1%) milk as opposed to whole fat milk. The reason????? The caloric/fat content of whole milk.  Whole milk contains usually between 3.25% and 4.0% fat, whereas 2% obviously contains 2% fat, with naturally occuring sugars (lactose) in it.  There are approximately the same amount in whole vs. skim 12-13 grams or about 3 teaspoons. Flavored milks are usually made from 1% or skim, but sugar is added in the chocolate and strawberry milk.  Children are getting 4 extra teaspoons of sugar per 8 oz. milk — sugars that aren't milk sugars.


Many experts think the flavored milks help prevent kids from turning to sodas, but most schools have already taken sugary/fizzy drinks off of the campus. Dr. Jatinder Bhatia, a member of the American Academy of Pediatrics' Committee on Nutrition says that milk consumption declines as the consumption of sugary drinks increases. He likes how the "milk mustache" campaign, recently featuring the cast of "High School Musical," Rihanna, David Beckham, Amanda Bynes, Alex Rodriguez, Carrie Underwood and Sasha Cohen helps eliminate milk's sometimes "uncool" image. The dairy industry is also working on packaging to help milk seem more appealing to kids. Currently 9,500 of the nation's 90,000 schools have started using single-serving plastic containers instead of the old-fashioned cartons. And fast-food restaurants like McDonald's, Wendy's, Burger King and Subway are also offering milk in bottles.


In conjunction with a healthy diet and exercise plan a high protein content of milk helps people preserve their muscle mass when they're trying to lose weight.  On an adequate dairy diet, you're less likely to store fat," he says. "And you're stimulating a process of using calories in muscle cells." Milk and yogurt act the same way, but cheese and ice cream contain less protein and don't work as well, he says.


Most kids are eating breakfast at school, they get plenty of sugar from the food.  Kids need energy, but parents complain about ADD, and schools complain about attention spans; perhaps there is a link.  Schools that have changed their school meal programs with healthier foods find kids pay more attention in class and are better behaved.  This is something to think about! We are told that we have to serve kids meals that they are familiar with ...fast food; otherwise, they won't eat lunch.  The proponents of flavored milk say milk needs added sugars; otherwise, they won't drink milk. Opponents say if they are taught good nutrition from a young age and not given the choice they will not expect it and drink the plain milk.


Studies have shown that income/education can play a big part in how people eat.  Nationally more than 60% of lunches are free or reduced price. 11 million children also get breakfast at school under the program. In many Broward schools this number is even higher.


Concerns over childhood obesity are up since data shows 64 percent of U.S. adults overweight, one-third being obese, and 15 percent of children ages 6-19 are overweight — triple the proportion in 1980.


Ann Cooper, the director of nutrition services in Boulder, Colorado’s school district, who has made a name for herself by advocating for healthier food in school lunch programs, points to the fact that the sugar in flavored milk (usually in the form of high-fructose corn syrup) adds 40 to 60 calories to each pint.  That can give a kid five extra pounds of weight over the course of a school year. Given the rising rates of childhood obesity, critics argue, the benefits of flavored milk don't outweigh the detriments of weight gain. This side of the debate prefers total removal of flavored milks in favor of white milk, no-added-sugar fruit juices, and water.


The National School Lunch Program still promotes the option of chocolate milk. It's also supporting "Flavored Milk Friday".  Some would like offering it as a “reward” to those that do well and given “coupons” or tickets to “purchase” the milk.


Guidelines are in place to prevent menus in most school meal programs from exceeding the guidelines for saturated fat and cholesterol and too low in fiber- and nutrient-rich fruits, vegetables, whole grains, and legumes.  One would think that would make it easy. Unfortunately 31 million American children eat meals at school, funded through USDA’s Child Nutrition Program. It was set up to feed hungry children and deal with surplus agricultural commodities.  The program provides an important safety net for kids in low income families - Federal government reimburses schools a flat rate of 25 cents per meal, and $2.68 for those provided free.  Only about $1 of that goes on the food. The School Nutrition Association estimates it costs more like $3 to produce a meal.

We all need t become more involved with the decision making process of making sure our kiddies are eating and drinking foods that are good and good for them. Contact individual schools to see how these decisions are made.