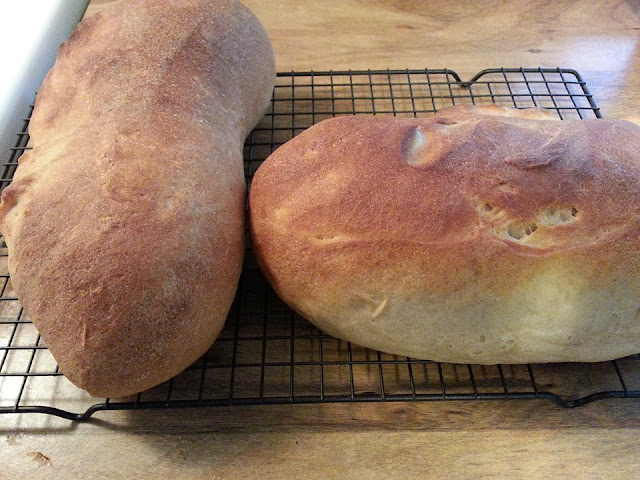 We would like to share a bit of research we came across recently concerning "Sourdough". What originally caught our eye was an analysis of laboratory tests. They say that Sourdough contains the greatest amount of protein for it's weight and size of any comparable food. "Hmm" we thought "just how does that come about when it's ingredients are all carbohydrates?" Apparently a wild yeast forms in the fermentation process of the starter. At that stage, a starch food is turned into a protein dynamo food.
The History of Sourdough
Sourdough is the oldest and most original form of leavened bread. The oldest recorded use of sourdough is from the Ancient Egyptian civilizations.
It was probably discovered as most things are by accident. If you simply mix any ground up grain with a liquid such as water or milk and let it sit in the open air at room temperature, wild yeasts in the air will settle in the mix, eat the natural sugars and convert them into lactic (and other) acids which give it a sour flavor. They also give off alcohol and carbon dioxide. The carbon dioxide is what will cause the bread to rise. When worked into a bread dough, the bubbles get trapped into the structure of the bread, and that is the little holes that you see.
The first recorded civilization we know about that used sourdough was the Egyptians around 1500 BC. There are many stories as to how they first discovered it, but you can probably imagine that some bread was left out and some of the wild yeast spores that are in the air at all times got mixed in the dough and they noticed that it rose and was lighter than the usual flat breads.
The Egyptians also made a lot of beer and the brewery and the bakery were often in the same place. a batch of flour may have been mixed with beer and produced a light loaf of bread, or the wild yeast spores were thick from the brewing and they got into the bread doughs and caused them to rise considerably more than the usual wild sourdoughs.
Through trial and error they found out that some of these sourdough cultures worked and tasted better than others. They could keep this culture alive by saving from their baking a little raw dough and adding more flour to it, and it would produce the same flavor. This is known as a sourdough starter. a good sourdough culture became very important to day to day living, and even taken by explorers when they went on expeditions around the world.
The Boudin Bakery of San Francisco During the gold rush days in California, some of the Boudin family who were well known master Bakers from France came to the San Francisco area. They found out that the sourdough culture there was very unique and they became very famous for their bread with this special flavor. The miners flocked to this bakery every morning for this special tasting bread. Since 1849 they have been using the same sourdough culture, which they call a "Mother dough" and the same recipe, flour, water, a pinch of salt and some of the this "Mother Dough".So important is their "Mother Dough" it was heroically saved by Louise Boudin during the Great San Francisco Earthquake of 1906.
Sourdough also came in handy when old timers had to tan hides. They rubbed it into the skin, fur side down till soft and dry. Some claim there starters to the fame of originating in the old country or from the Klondike era. Recently a sum of $600.00 American was paid by a restaurant desiring the authenticity of Alaskan sourdough from the gold rush days.