Your checklist of things to remove and put in separate plastic bins in the airport security line just keeps getting longer. 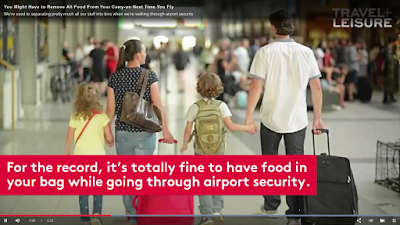 ANDREA ROMANO
A few months ago, you might have noticed that some TSA agents remove any food items from their carry-on bags before putting them through the scanner.
started making the fairly unusual request that travelers
Up until recently, the policy was simply a “recommendation” issued by the TSA to help with the screening process, according to The Washington Post.
But now, it looks like the policy is becoming more concrete. More travelers, including Shivani Vora of The New York Times, have encountered agents who have asked them to remove any edible items, citing that “it’s a new policy.”
Snack removal is supposed to actually speed up lines and help agents better check for explosive devices. Larry Studdiford, a security consultant for airports and the founder of Studdiford Technical Solutions, told The New York Times that, for example, a block of cheese can look like a block of C-4 explosives if not screened correctly.
But some people are not convinced. Stellene Volandes, the editor-in-chief of Town & Country magazine, told The New York Times that she encountered a passenger who ended up holding the line even longer than expected.
“It seemed like he had gone on a full Costco run for Starburst and bite-size Twix, and it took him almost 15 minutes to unpack it all and get through security,” she said. Some travelers on Twitter seem to agree.

I encountered @TSA food removal policy. I took out lots of snacks into a separate bin. Then they swabbed all of them. After about 10 swabs, the machine dinged so I got a full body pat down. It was not faster and I don’t feel safer. ⁦@washingtonpost⁩ https://t.co/mK9tJHiGdk
— Dr. Anne Jefferson 🌧🏡 (@highlyanne) June 30, 2018

Despite the growing prevalence of this practice, TSA spokesman Mike England told The Washington Post that the policy still remains up to the agent's discretion and is not mandatory for all passengers.
“It’s not a requirement. It’s a recommendation. But you might see them recommending a little louder during busy times of the day,” he said.
And, despite the many complaints by passengers both in real life and online, the policy has actually helped speed lines up, according to England. Even with a few extreme incidents of passengers being held up.

Finally sorted through all the reader emails re: TSA's snack-checking procedures. (https://t.co/yPzplbq9TU) Tallied them up, and here's what folks are saying (at least to me): pic.twitter.com/wMb4o6BjCs
— Martine Powers (@martinepowers) July 2, 2018

According to The Washington Post, nationally, 96 percent of standard passengers have a wait that is 20 minutes or less.
For the most part, you don’t have to worry about snacks being full-on taken away from you, regardless of whether or not you have to take them out of your bag. However, pre-packaged and sealed food items cause less of an issue for both agents and travelers.

According to The Washington Post, nationally, 96 percent of standard passengers have a wait that is 20 minutes or less.
For the most part, you don’t have to worry about snacks being full-on taken away from you, regardless of whether or not you have to take them out of your bag. However, pre-packaged and sealed food items cause less of an issue for both agents and travelers.

For a highlighted guide with the importance of preparation before arriving at the airport and include a chart of the major airlines and their policies for how they accommodate passengers with common food allergies. Check out this great resource here: https://millionmilesecrets.com/guides/flying-with-food-allergies/
This Story Originally Appeared On Travel + Leisure
personal chefs and event catering
Miami + Miami Beach + Fort Lauderdale + Palm Beach
info@yadachef.com | 954-367-YADA (9232)
www.yadachef.com