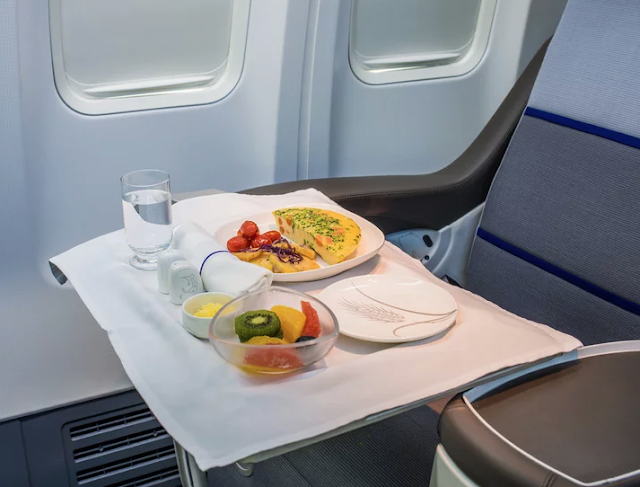 We can all agree that airplane food tastes different—but why? Well, for one, it’s made differently. Chef George Mendes, of NYC’s Aldea, was recently tapped to design a menu for TAP Air Portugal as part of their new program recruiting Michelin-starred Portuguese chefs (including Jose Avillez, Rui Paula, Rui Silvestre, Miguel Laffan, and Henrique Sa Passoa) to serve their food on business-class flights from JFK to Lisbon.
We chatted with Mendes about how a chef goes about making food for an airplane that tastes good, but also feels comfortable to the weary, jet-lagged, dehydrated traveler. (You won't see any foams, for example.)
Below, five ways that air food differs from land food:

It’s only cooked halfway before boarding the plane.

That’s right—the food finishes cooking on the airplane, while you’re in the sky, after being placed in "blastingly hot" mini ovens. This ensures that the food isn't dried out when you eat it.
"They are sliding trays of food into a really, really hot oven that blasts your food in a very short amount of time," said Mendes. "We had to make sure that the food was able to handle the blasting heat like that, so customers didn’t get dry food and still maintained its identity and beauty." That's why the fish and chicken dishes are undercooked when they get on the plane.

Green vegetables don't work so well, as they dry out easily in the intense heat.

"I stayed away with green vegetables," Mendes said, instead opting for dishes that could handle the oven. One of his dishes, the mushroom stew with the beef, was perfect for this setting.
"I wanted it to be the stew that could handle being reheated," he said. "The white button mushroom stew was in my cookbook, and it was perfect for in-flight. It's very soulful; it's a recipe my mom would make back home."

It has way more salt and seasoning.

Because flavors taste less pronounced at higher altitudes, Mendes had to up the salt content in his dishes significantly.
"We did increase salinity," he said, noting that the dishes would taste super-salty underground, but that they don't in the air. "Your palate definitely changes when you’re 30,000 feet in the air."

"We wanted to please the public with the normal approachable chicken and beef and vegetarians preparations that we’re used to and want on flights: nothing too out-of-the-box," said the chef. "I took those proteins and embellished them in ways that were very Portuguese in nature. For fish, we went with salt cod, we did a chicken preparation, and a beef preparation, and we went to the basic Portuguese pantry that most represented traditional Portuguese cooking: olive oil, parsley, cilantro, paprika, garlic, black olives, potatoes, meats that are marinated."

Garnishes are usually a no-go.

Obviously, flight attendants aren't plating the food; "Everything you put on the plate is how it's served," said Mendes. And garnishes don't do so well in the oven, where their freshness is zapped.
Similarly, chef Christophe Langrée, who also designs menus for airplanes, said, "I don’t garnish with fresh vegetables because I know the dish will be warmed in the oven before being served,” adding that cherry tomatoes make the dish watery when heated.
When Mendes flies – and he tries to get to Portugal at least twice a year – he usually orders the standard proteins.
"The kind of mood I'm in – I'm pretty tired and pretty hungry after getting myself to the airport," he said. "More often than not, I stick with chicken or beef."
Mendes’ food will be available on TAP Air Portugal business-class flights from JFK to Lisbon until the end of the year.
https://www.foodandwine.com/news/airplane-food-chef-george-mendes-portugal
personal chefs and event catering
Miami + Miami Beach + Fort Lauderdale + Palm Beach
info@yadachef.com | 954-367-YADA (9232)
www.yadachef.com