PARIS – Diners in French bistros and cafes wanting to take home leftovers are often met with bewildered looks. That could soon change with a proposed law requiring small restaurants to provide "le doggie bag" to any customer who asks.
While doggie bags are common in the United States and Asia, where they are viewed as a compliment to the chef, Europeans often consider it gauche to take home uneaten food. 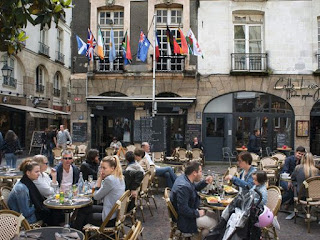 “In Paris and large cities, people tend to eat out more. But in the rest of France, food is something that is mostly consumed at home,” explained Paris sociologist Anne Lhuissier. “We go to the restaurant for special occasions or as a special treat, so taking food home feels bizarre."
The practice is so unusual in this food-obsessed country that people say “le doggie bag,” because there is no equivalent term in French. The hotel and restaurant industry union UMIH tried to promote the more chic “le gourmet bag.”
“It’s a smart move,” said Emmanuel Dumas, 36, in Paris. “If the food is good, you won’t have any leftovers. And if you have leftovers, you are still getting what you have paid for!”
A recent government survey found that 70% of French people have never taken home leftovers, but that 75% of the respondents were open to the idea of doggie bags.
Bérangère Abba, a member of Parliament who proposed the doggie bag law, calls it a "common-sense measure" aimed at reducing food waste that will find wide acceptance. She said the vote on the bill is likely by the end of May.
“Most consumer associations and the majority of restaurateurs have welcomed the bill,” Abba said. She said some critics complained that supplying containers to the public would be an extra burden on restaurateurs.
In the past few years, this country known for gourmet food and fine dining has made huge strides toward curbing food waste in half by 2025.
France banned supermarkets from throwing away unsold food, ordering that it be donated to charities. In 2016, the French government mandated that restaurants serving more than 150 customers a day must provide doggie bags if requested. The new measure would expand the rule to include all restaurants, since most French eateries are smaller than that.
Grass-roots initiatives such as food-sharing apps and community groups that donate unwanted food have also helped spread the message.
As a result, France clinched the top spot last year in a survey of 25 countries that waste the least amount of food.
The report, by The Economist and the Barilla Center for Food and Nutrition Foundation,  also highlighted a curious point: The French waste 234 pounds of food per person annually, compared with about 430 pounds per person in the United States, where doggie bags are the norm.
The difference can be attributed to French views on food, said Lindsey Tramuta, author of the guidebook The New Paris. While portions are growing, France still largely lacks supersized meals and retains a culture where slow dining and enjoying good food every day is normal, Tramuta said.
“I think the French in general know their limits and order what they can realistically eat, in which case they won’t even need a doggie bag,” she said.
https://www.usatoday.com/story/news/world/2018/05/02/france-doggie-bag-restaurant-leftovers/565469002/