M&M’s Wants You to Pick Its Next Flavor Again 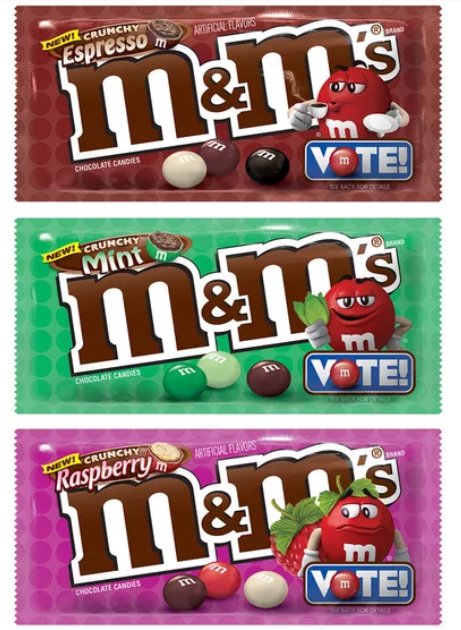 Three new varieties of M&M have just landed on store shelves nationwide, and now, candy fans whose sweet tooth only rivals their love of democracy can cast their vote on which of the three flavors should stick around for the long haul.
Crunchy Mint, Crunchy Raspberry, and Crunchy Espresso were first sent to select retailers last month, but have finally been shipped to stores nationwide, and people across the country are being encouraged to participate in M&M’s second “Flavor Vote”—with the online ballot set to be open until May 25.
On the outside, these new limited-edition flavors feature M&M’s signature colored candy shell, but inside, they deviate from your standard M&M’s in a number of ways: First, all three are made with dark chocolate. And second, to earn their “Crunchy” credentials, they also feature a rice crisp center: The Raspberry variety has a regular rice crisp center while the Mint and Espresso version have a cocoa rice crisp center for an extra chocolate pop.
http://www.foodandwine.com/news/mms-new-flavors-crunchy-espresso-mint-raspberry
personal chefs and event catering