Vitamin B17 - The More You Know 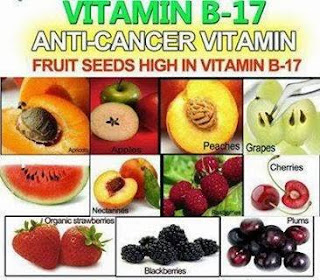 Dr. Ernest T. Krebs, Jr. is the biochemist and researcher who first isolated Laetrile (vitamin B-17) in apricot seeds and also discovered B-15 (pangamic acid, a vitamin which has been proven to be an important adjunctive therapy in the treatment of illnesses related to circulation).
After years of study and testing he was convinced of the therapeutic value of Laetrile. To prove that it was not toxic to humans he injected it into his own arm. As he predicted, there were no harmful or distressing side effects. The Laetrile had no harmful effect on normal cells but was deadly to cancer cells.
Many people take Laetrile / B17 in its natural state: bitter almonds or apricot seeds. And many of these people end up in the emergency wards nearly poisoned to death. This is because they are not following the directions, or taking the seeds without any supervision.
The apricot seeds contain cyanide. Although Laetrile / B17 is less toxic than sugar and 21 times less toxic than aspirin, you can take to much... Unfortunately, one can take to much of anything — even water.
So to question the use of vitamin B17 on the grounds of toxicity is extraordinary as all the drugs used currently in orthodox cancer therapy are extremely toxic.
Here is how it works: Cancer loves sugar. The sugar in the apricot seeds surrounds cyanide. The cancer draws in the sugar, eats it, and releases the cyanide at the cancer cell and only at the cancer cell: sort of like a smart bomb. The problem with this is that some people take too much. While others take enough, but also have a diet high in sugar.
Simply put: you must stop all sugar consumption, cut back drastically on carbohydrates, and then take your apricot seeds. Otherwise, you can do your body a great disservice, and not do anything to battle your cancer.
There is no “free” hydrogen cyanide in Laetrile. When Laetrile comes in contact with the enzyme beta-glucosidase, the Laetrile is broken down to form two molecules of glucose, one molecule of benzaldehyde and one molecule of hydrogen cyanide (HCN). Within the body, the cancer cell—and only the cancer cell—contains that enzyme.
The key here is that the HCN must be FORMED. It is not floating around freely in the Laetrile and then released. It must be manufactured. The enzyme beta glucosidase, and only that enzyme, is capable of manufacturing the HCN from Laetrile. If there are no cancer cells in the body, there is no beta-glucosidase. If there is no beta-glucosidase, no HCN will be formed from the Laetrile
Is it necessary to have the seeds and the Vitamin together when undergoing metabolic therapy?
Dr. Contreras says “yes”. Certain components of the seeds are not included in the purified forms of amygdalin. The seeds are the raw form of vitamin B-17, containing many other nutrients that act synergistically with the purified form to help its active ingredients assimilate into the body.
To start, it is recommended that along with the purified forms of B-17, either intravenous or oral, cancer patients eat one apricot seed for every 10 lbs of body weight. If this dosage is tolerated well, it may be increased to 30 to 35 kernels per day. IMPORTANT: For adults, more than 6 per hour or 30 per day is not recommended.