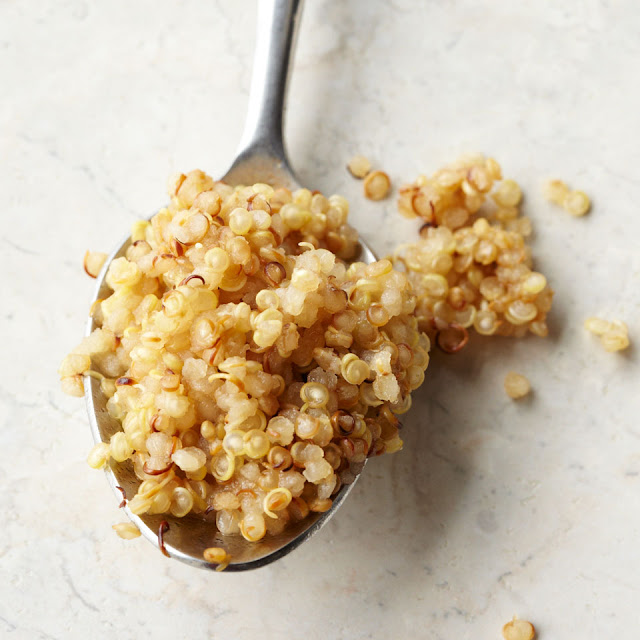 Quinoa dates back three to four thousand years ago when the Incas first realized that the quinoa seed was fit for human consumption. According to WHFoods quinoa “was the gold of the Incas” because the Incas believed it increased the stamina of their warriors. The Quinoa Corporation calls quinoa the “Supergrain of the Future. ”
Who would not want to reap the benefits of this amazing superfood?
Here are seven health benefits of quinoa:
1. Quinoa is one of the most protein-rich foods we can eat. It is a complete protein containing all nine essential amino acids.
2. Quinoa contains almost twice as much fiber as most other grains. Fiber is most widely known to relieve constipation. It also helps to prevent heart disease by reducing high blood pressure and diabetes. Fiber lowers cholesterol and glucose levels, may lower your risk of developing hemorrhoids and may help you to lose weight as it takes a longer time to chew than does other foods because it makes you feel fuller for longer and is less “energy dense” which means it has fewer calories for the same volume of food.
3. Quinoa contains Iron. Iron helps keep our red blood cells healthy and is the basis of hemoglobin formation. Iron carries oxygen from one cell to another and supplies oxygen to our muscles to aid in their contraction. Iron also increases brain function because the brain takes in about 20% of our blood oxygen. There are many benefits of iron some more of which include neurotransmitter synthesis, regulation of body temperature, aids enzyme activity and energy metabolism.
4. Quinoa contains lysine. Lysine is mainly essential for tissue growth and repair.
5. Quinoa is rich in magnesium. Magnesium helps to relax blood vessels and thereby to alleviate migraines. Magnesium also may reduce Type 2 diabetes by promoting healthy blood sugar control. Other health benefits of magnesium include transmission of nerve impulses, body temperature regulation, detoxification, energy production, and the formation of healthy bones and teeth.
6. Quinoa is high in Riboflavin (B2). B2 improves energy metabolism within brain and muscle cells and is known to help create proper energy production in cells.
7. Quinoa has a high content of manganese. Manganese is an antioxidant, which helps to prevent damage of mitochondria during energy production as well as to protect red blood cells and other cells from injury by free radicals.