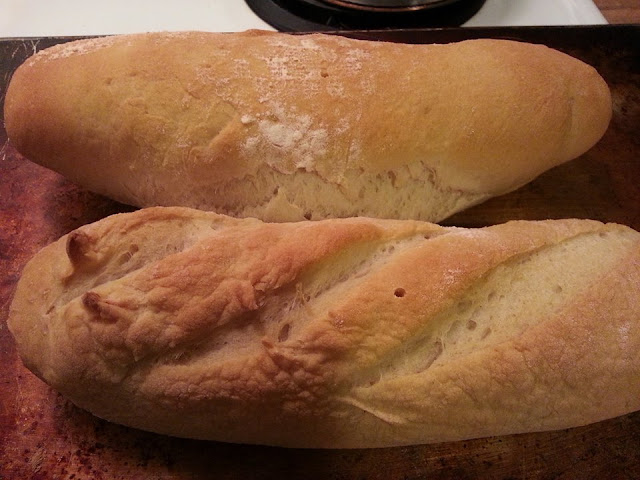 So many people have asked us for an "Authentic" baguette/batard recipe. Here is a GREAT one that was presented on "Baking with Julia". We cut the recipe in half to make 2 loaves. One was slice in the traditional fashion the other we left plain to show how it "explodes" if you do not.
Batard from Baking with Julia (Chef Danielle Forestier)
Batard are made from the same ingredients as baguettes. The only difference is the length of the finished product. Both the baguette and the batard weigh 250g or 8.8 ounces. It is the law in France you can NOT use any ingredients except flour, water, yeast and salt and that you must wait 20 minutes before selling the bread after baking.
Makes 3-4 loaves
5 cups bread flour
2 cups cool water (about 78 F)
One .6-ounce/17g cube compressed (fresh) yeast
2 1/2 teaspoons salt
Mound flour on a smooth work surface and make a well in the center. A little at a time, pour water into the well. Use fingertips to draw in flour closest to water. Work in increasingly larger circles, adding water and drawing in flour to form a medium-soft dough. Pull dough toward you with a dough scraper. Smear small pieces of dough across the work surface away from you with the heel of your hand. Work through all the dough in this way. Put dough on a floured board, cover with a towel, and let rest 15 minutes. Flatten dough into a disk and crumble yeast over it; fold dough over on itself to mix in yeast. Repeat flattening and folding until yeast is fully incorporated. Sprinkle on salt and knead for 15 minutes, using flour as necessary, until smooth and elastic.
Grab dough at one end and lift shoulder-high. Slam it onto work surface and roll dough over on itself. Give dough a quarter turn, grab at one end, and repeat slamming, rolling, and turning motion for 10 to 15 minutes (about 865 times if you count), using flour as necessary, until the dough is smooth and elastic. Form into a tight ball and let rest, covered with a floured towel, for 15 minutes. Turn dough over and flatten slightly. Grab dough on either side and stretch it out; fold stretched ends back to the center. Repeat with top and bottom. Work into a tight ball and put onto a floured baker's peel or floured work surface, cover with a floured towel, and let rise in a warm place until nearly doubled. Turn dough out onto work surface and punch down. Divide into thirds or quarters (or halves, for boules; see below). Form into balls, cover lightly, and let rest 5 minutes. Rub flour into a large cotton towel and lay on a board or peel. Make a standing pleat at a short end of the towel and set aside. To form batards, turn dough smooth side down and flatten it. Lift dough, fold into thirds, and flatten into an even rectangle. Roll and flatten two more times. Dust hands, dough, and board with flour as necessary. Put dough seam side up on work surface and mark the midpoint with a groove. Lift top edge of dough and fold it two thirds of the way down. Seal the seam with the heel of your hand. Lift, fold, and seal again. Fold top edge down to bottom edge and seal the seam. Scrape work surface and, working with one piece of dough at a time, turn the dough seam side down, cup right hand over center of dough, and place cupped left hand over right. Start rolling dough back and forth along counter, widening the space between hands as dough extends; keep hands cupped and fingertips and heels of hands touching the counter. Push dough forward with heels of hands and pull it back with fingertips.
When it is about 14 inches long, press down on ends to taper them. Lift shaped dough, seam side up, onto floured towel and pull a pleat of towel up to cradle it. When pieces are shaped, fold end of towel over loaves and let rest 2 hours, or until dough has risen and barely springs back when poked. Position rack in lower third of oven and line with a baking tile. Place a cast-iron skillet on oven bottom.
Preheat oven to 425F/218C/Gas 7
Flour a baker's peel. Toss 1/2 cup water into skillet and immediately close oven door. Flip one batard onto the peel and slash 3 diagonal cuts in the top. Transfer immediately to the oven. Slash and transfer the other two batards as fast as possible. Bake 20 to 25 minutes, until brown and an internal temperature of 200F/93C. Cool loaves at least 20 minutes before cutting.
To form a boule, fold dough over on itself a few times on an unfloured work surface. Work dough between hands and surface to form a smooth ball. Line a colander with a floured towel and place dough inside. Let it rise in the colander 2 hours.
Position rack in lower third of oven and line with a baking tile. Place a cast-iron skillet on oven bottom. Preheat oven to 425 F. Flour a baker's peel.
Toss 1/2 cup water into skillet and immediately close oven door. Roll the boule onto the floured peel and transfer to the oven. Bake 25 minutes or until brown and an internal temperature of 200 F. Cool at least 20 minutes before cutting. 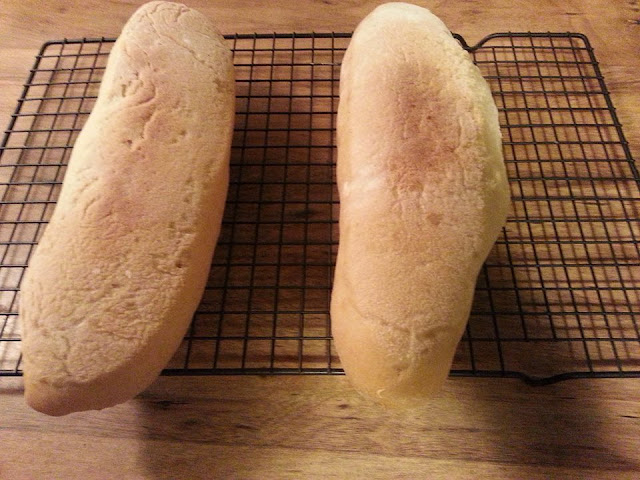 "How language changes. A gobbet is an eighteenth-century word for a mouthful, a polite and dainty word, p erfect to describe these little cakes." We have come up with the following adaption: Makes about 18 mini-muffin cakes. What you will need: 1/2 cup/113g of unsalted butter (1 stick), at room temperature 1/4 cup/50g sugar grated zest and juice of 1 orange 1 1/2 cups/204g all purpose flour 1 teaspoon/5ml baking powder 1/2 teaspoon/2ml ground ginger 2 extra large eggs, beaten This is what you do: Cream the butter with the sugar and orange zest. In a separate bowl, sift the flour, baking powder, and ground ginger together. In an additional bowl, beat your eggs. Mix the flour and beaten eggs alternately into the creamed mixture. When fully mixed, add the orange juice. Butter the smallest tartlet (we used mini-muffin) tins/pans and spoon in the mixture. Bake in a preheated 375 degree oven for 15 minutes or until done. These cakes would
Read more

Sometimes  “old” classic recipes are the best.  This recipe has to be from  at least  the 1950’s.  It was found whilst cleaning out my Nanna’s (Nonna’s) kitchen.   No need to have McIntosh apples any good baking apple will do.  Since the bottom is the top you can arrange  a couple of apples before pouring in the first amount of batter.   5 apples, peeled, sliced, cored 1/2 cup/85g granulated sugar 1 1/2 teaspoons/7ml ground cinnamon Sprinkle the sugar and cinnamon over apples in a medium sized bowl.  Toss to coat all the apple pieces and let sit while making the batter. 3 cups/298g all purpose flour 2 cups/383g granulated sugar 1 teaspoon/5ml baking soda 2 teaspoons/10ml baking powder 1 cup/250ml vegetable oil 4 large eggs 1/3 cup/80ml orange juice (we used triple sec) 2 teaspoons/10ml pure vanilla extract Greased bundt/tube pan Pre-heat oven to 350F/176C/Gas Mark 4 In a large bowl add the flour, sugar, baking so
Read more

Greek Salad Deconstructed - History And The Invasion Of The Tomato

Traditionally Greek salad  is made with pieces of tomatoes, sliced cucumbers, onion, Feta cheese (served in a single rectangular-shaped cutting put over the vegetables), and olives (usually Kalamata olives), typically seasoned with salt and oregano, and dressed with olive oil. GREEK CUISINE AND THE 19TH CENTURY INVASION OF THE TOMATO Amazingly, it’s the same dish that is also one of the most popular lunch options in the United States – the Greek Salad. In  Greece  we call it  ‘Horiatiki’ , which means village or peasant salad – basically a combination of tomatoes, onions, cucumbers, green peppers, olives and feta cheese, dressed in olive oil and sprinkled with oregano. Please also note that an authentic Greek salad does not include lettuce. It is quite common for Greeks to eat seasonally. A Greek salad is primarily a summer dish, and since lettuce only grows in Greece during the winter months a traditional  ‘Horiatiki’  salad does not include lettuce. Before we t
Read more

These easy soft caramels can be whipped up in about 15 minutes. You do not need a candy thermometer to m ake these caramels and they literally melt in your mouth! EASY 4 INGREDIENT SOFT CARAMELS (NO CANDY THERMOMETER REQUIRED) INGREDIENTS 1½ sticks butter ½ cups/100g sugar 3 tablespoons/45ml light corn syrup 14 ounces/415ml/397g sweetened condensed milk optional: coarse sea salt, ½ teaspoon/2ml vanilla (see note) INSTRUCTIONS In a medium sauce add butter and sugar and stir over medium heat until melted. Stir in corn syrup and condensed milk. Bring to a boil and then decrease to simmer 7-10 minutes or until mixture achieves deep golden color, stirring constantly. (*For lower altitudes, simmer time may need to be reduced 2-3 minutes, watch carefully for coloring!) - See update below recipe! Pour caramel into a foil-lined 8x8 inch pan and allow to cool completely. Sprinkle with coarse sea salt if desired. When completely cooled, cut into squares and wrap in wax paper. NOTES
Read more