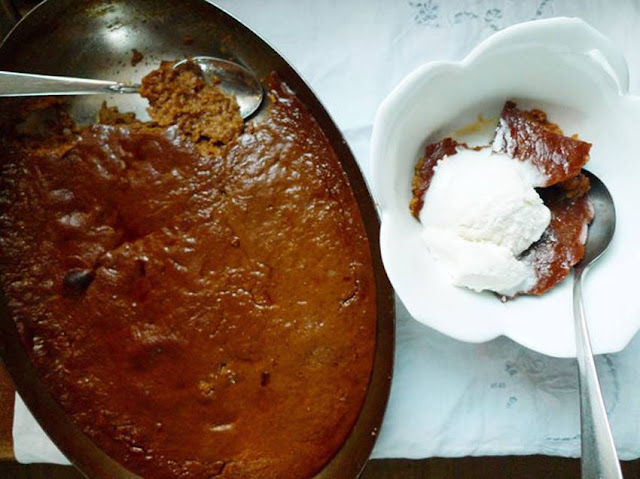 Turns out, Nov. 13 is National Indian Pudding Day. It sneaked up on you again, didn't it? You can't be blamed.
Indian pudding is virtually unknown outside of New England, and even there it's tricky to find. But this enduring New England dessert may actually deserve a day of its own.


The origins of this food holiday are obscure but the dish itself is unquestionably all-American. The "Indian" in Indian pudding, Wall explains, refers to Native American cornmeal. The original pudding was likely just cornmeal, milk and molasses, steamed or boiled for a very long time. She calls it one of the country's first truly American recipes.
Like much of traditional New England cooking, Indian pudding was quite plain. It fell out of favor, though it never disappeared entirely. Some places, like the historic Wayside Inn in Sudbury Mass., find that though the dish can be a hard sell to the uninitiated, it's still a favorite with locals.
Longfellow's Wayside Inn Baked Indian Pudding Recipe
(Makes 12 servings — halve recipe for smaller batch)
2 quarts/2 liters milk
1 teaspoon/5ml nutmeg
1 1/2 cups/256g cornmeal
1/3 teaspoon/1.6ml ginger
2 cups/500ml molasses
2 1/2 cups/625ml milk
1 teaspoon/5ml salt
1 1/2 cups whole eggs ( 7-8 large eggs)
1 teaspoon/5ml cinnamon
Bring 2 quarts/2 liters of milk to boil in a heavy pan. Add cornmeal to milk and blend with a wire whisk until it thickens. Add molasses, salt, cinnamon, nutmeg and ginger and bring to a boil. In a separate container, blend the 2 1/2 cups/825ml of milk and eggs, slowly add the hot mixture to it and stir. Place in a very large, buttered and sugared casserole. Bake in a 350F/175C/Gas 4 oven for approximately 1 hour. Test pudding with a knife for doneness. Let stand and then serve with whipped cream or vanilla ice cream.
Palm Beach Personal Chef
Fort Lauderdale Personal Chef
Miami Personal Chef
Freelance Chef
www.yadachef.com