Greek Salad Deconstructed - History And The Invasion Of The Tomato 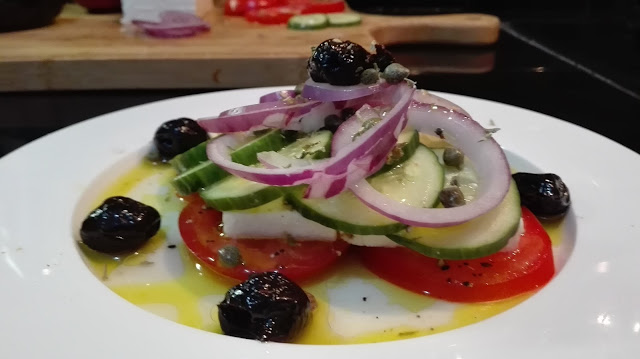 Traditionally Greek salad is made with pieces of tomatoes, sliced cucumbers, onion, Feta cheese (served in a single rectangular-shaped cutting put over the vegetables), and olives (usually Kalamata olives), typically seasoned with salt and oregano, and dressed with olive oil.


GREEK CUISINE AND THE 19TH CENTURY INVASION OF THE TOMATO 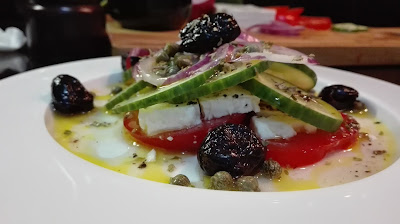 Amazingly, it’s the same dish that is also one of the most popular lunch options in the United States – the Greek Salad.


In Greece we call it ‘Horiatiki’, which means village or peasant salad – basically a combination of tomatoes, onions, cucumbers, green peppers, olives and feta cheese, dressed in olive oil and sprinkled with oregano. Please also note that an authentic Greek salad does not include lettuce. It is quite common for Greeks to eat seasonally. A Greek salad is primarily a summer dish, and since lettuce only grows in Greece during the winter months a traditional ‘Horiatiki’ salad does not include lettuce.
Before we take a closer look at our key ingredient – the tomato – let’s consider the history of this lovely salad. From its Greek name we assume that it was a rural dish. It is true that the salad’s essential ingredients were often what a farmer would take to the field for his mid-morning snack, only he would keep the ingredients uncut and wrapped in a cloth with a piece of bread.  When the time came, he would bite straight into his chunk of feta, his tomato and even (quite heroically) his onion!
The salad’s exact origin is debatable, but one thing we can be sure of is that the Greek Salad  is not part of the country’s long established traditional cuisine. We know this because, incredibly, the tomato did not become popular in Greece until the end of the 19th, beginning of the 20th century. This is hard to believe, considering how fast it’s made itself a home here in Greece. 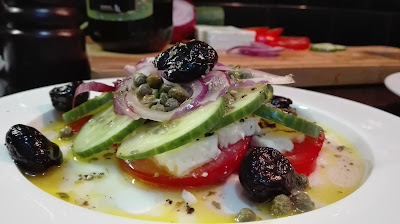 The Tomato Invades Europe
Tomato seeds were first brought to Europe from South America by the Conquistadors, but due to the plant’s resemblance to atropa belladonna (Deadly nightshade) it was viewed with suspicion and grown purely ornamentally. The Italians were among the first to brave the tomato. Tomato recipes began making an appearance in Italy towards the end of the 16th century, but tomato seeds were not introduced to Greece until 1818 when the country was still part of the Ottoman Empire. Shortly thereafter, in 1821, the country embarked on a war of independence and everyone was simply too preoccupied with the war to be overly concerned with this strange new fruit.
The first tomatoes to grow in Greece were on the island of Syros. Not long after, the petite waterless tomato, similar to the cherry tomato was first grown in Santorini. To this day these tomatoes still thrive on Santorini’s rich volcanic soil, sunshine and heavy morning dew. In 1915 the first canning plant opened in Nauplion, supplied by increasing tomato production in the nearby plains of the Argolis. It wasn’t long before the tomato quickly became one of the main ingredients of Greek cuisine.
Before the Tomato Conquered GreeceToday, it’s hard to imagine a time when iconic Greek dishes such as ‘domates yemistes’ (stuffed tomatoes), ‘kokkinisto’ (literally ‘reddened’ meat stew) and countless others, including, of course, the ubiquitous Greek Salad, were unheard of. Whatever did we eat before the invasion of the tomato?
Many ancient Greek tales tell us of heroes roasting oxen, sheep and goats over an open flame in honor of the gods and of course for their own enjoyment – the two always seemed to go together, and few found fault in this. The diet also consisted of milk, yogurt and cheese – Cheese that was very similar to the modern day feta. They made bread from barley and wheat.  They preserved and ate olives and used olive oil in their cooking. They grew vegetables in their gardens, set out fishing nets on the sea, and searched the rocky coasts for octopus and other seafood. Sugar did not exist in those days, but the ancients satisfied their ‘sweet tooth’ with honey and fruit – grapes and figs were especially prized and eaten both fresh and dried. Wine was an important part of any meal.
It was the Greeks who produced the first ever cook book. Debating food and the best ways to enjoy it was a common practice. Some traditionalists insisted that meat and bread were the proper ‘manly’ diet and scorned the fancy cooking and more delicate dishes advocated by others. They in turn considered the ‘carnivores’ barbaric and unrefined. Then there were those who argued in favor of a purely vegetarian diet as being more civilized. It all sounds very familiar, doesn’t it? 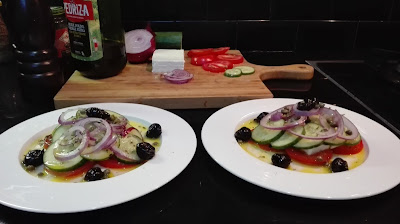 A Culinary Love AffairMuch of Greek cuisine has remained intact since antiquity, merely expanding to include new ingredients as they were introduced. Approaches to eating haven’t changed either. In the 1st century AD, Plutarch wrote, “We do not sit at the table to eat… but to eat together” – an attitude that prevails in Greece to this day.
Even though we might conclude that Greeks managed extremely well without all the ‘reddened’ dishes we enjoy today, I’m not giving up on tomatoes. They thrive in the Greek sunshine and our long, dry summers. Despite all I know of their history, they still seem quintessentially Greek to me, deeply entrenched in what we eat and how we see ourselves. So, ‘kali orexi’ (bon appétit) and pass the Greek salad!
http://equator.eftours.com/the-ef-passport/most-popular-destinations/greece/greek-cuisine-and-the-invasion-of-the-tomato

"How language changes. A gobbet is an eighteenth-century word for a mouthful, a polite and dainty word, p erfect to describe these little cakes." We have come up with the following adaption: Makes about 18 mini-muffin cakes. What you will need: 1/2 cup/113g of unsalted butter (1 stick), at room temperature 1/4 cup/50g sugar grated zest and juice of 1 orange 1 1/2 cups/204g all purpose flour 1 teaspoon/5ml baking powder 1/2 teaspoon/2ml ground ginger 2 extra large eggs, beaten This is what you do: Cream the butter with the sugar and orange zest. In a separate bowl, sift the flour, baking powder, and ground ginger together. In an additional bowl, beat your eggs. Mix the flour and beaten eggs alternately into the creamed mixture. When fully mixed, add the orange juice. Butter the smallest tartlet (we used mini-muffin) tins/pans and spoon in the mixture. Bake in a preheated 375 degree oven for 15 minutes or until done. These cakes would
Read more

Sometimes  “old” classic recipes are the best.  This recipe has to be from  at least  the 1950’s.  It was found whilst cleaning out my Nanna’s (Nonna’s) kitchen.   No need to have McIntosh apples any good baking apple will do.  Since the bottom is the top you can arrange  a couple of apples before pouring in the first amount of batter.   5 apples, peeled, sliced, cored 1/2 cup/85g granulated sugar 1 1/2 teaspoons/7ml ground cinnamon Sprinkle the sugar and cinnamon over apples in a medium sized bowl.  Toss to coat all the apple pieces and let sit while making the batter. 3 cups/298g all purpose flour 2 cups/383g granulated sugar 1 teaspoon/5ml baking soda 2 teaspoons/10ml baking powder 1 cup/250ml vegetable oil 4 large eggs 1/3 cup/80ml orange juice (we used triple sec) 2 teaspoons/10ml pure vanilla extract Greased bundt/tube pan Pre-heat oven to 350F/176C/Gas Mark 4 In a large bowl add the flour, sugar, baking so
Read more

These easy soft caramels can be whipped up in about 15 minutes. You do not need a candy thermometer to m ake these caramels and they literally melt in your mouth! EASY 4 INGREDIENT SOFT CARAMELS (NO CANDY THERMOMETER REQUIRED) INGREDIENTS 1½ sticks butter ½ cups/100g sugar 3 tablespoons/45ml light corn syrup 14 ounces/415ml/397g sweetened condensed milk optional: coarse sea salt, ½ teaspoon/2ml vanilla (see note) INSTRUCTIONS In a medium sauce add butter and sugar and stir over medium heat until melted. Stir in corn syrup and condensed milk. Bring to a boil and then decrease to simmer 7-10 minutes or until mixture achieves deep golden color, stirring constantly. (*For lower altitudes, simmer time may need to be reduced 2-3 minutes, watch carefully for coloring!) - See update below recipe! Pour caramel into a foil-lined 8x8 inch pan and allow to cool completely. Sprinkle with coarse sea salt if desired. When completely cooled, cut into squares and wrap in wax paper. NOTES
Read more

So many people have asked us for an "Authentic" baguette/batard recipe. Here is a GREAT one that was presented on "Baking with Julia". We cut the recipe in ha lf to make 2 loaves. One was slice in the traditional fashion the other we left plain to show how it "explodes" if you do not. Batard from Baking with Julia (Chef Danielle Forestier) Batard are made from the same ingredients as baguettes. The only difference is the length of the finished product. Both the baguette and the batard weigh 250g or 8.8 ounces. It is the law in France you can NOT use any ingredients except flour, water, yeast and salt and that you must wait 20 minutes before selling the bread after baking. Makes 3-4 loaves 5 cups bread flour 2 cups cool water (about 78 F) One .6-ounce/17g cube compressed (fresh) yeast 2 1/2 teaspoons salt Mound flour on a smooth work surface and make a well in the center. A little at a time, pour water into the well. Use fingertips to draw i
Read more