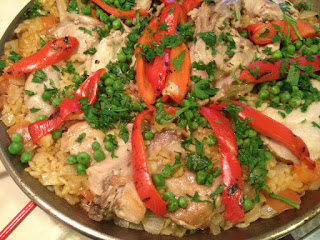 June is the the beginning of Summer here in the northern hemisphere and it is also the time when we celebrate the longest day of the year. “Skt. Hans”, or St. John’s Day, as it is known throughout Scandinavia, is celebrated with bonfires and outdoor cookery.  Originally I wanted to do typical Norwegian fare, but after speaking with a dear friend I learned that the traditional foods have given way to “International Fare”.  Spain has a huge expat Norwegian community, and Florida was founded by the Spaniards in 1513 by Ponce de Leon who led the first European expedition.  So I thought I would  offer one of my favourite dishes from Valencia Spain, Paella.

Paella was originally a peasant dish, cooked over an open fire in the fields and eaten directly from the pan.  Originally snails were the main protein used as they were plentiful in the fields.  Occasionally rabbit or duck would be added and - if you were really well off - chicken. Every Spanish mother claims to make the best paella. Variations to the dish abound.  The three most well known versions are the “Valencian Paella” which is described above, the “Paella de Marisco”(seafood), and the “Paella Mixta” (a mixture of land animals, seafood, white rice and vegetables).  Below is my favourite version of the Mixta. This can easily be done on the grill or an open flame outside. You need to be able to regulate the heat.

In a large saucepan heat the broth with paprika, saffron and peeled onion to a boil.  Let simmer for 15 minutes while you are preparing the other ingredients.  In a metal paella pan with a 15 inch/38cm bottom pour in the oil.  Add the chorizo and cook for 7-8 minutes (notice the beautiful colour the oil turns from the chorizo).  Remove from pan to a dish, and add the chicken to the pa,n being careful not to crowd it or it will steam, not brown.
You may need to do this in batches.  Cook on one side for 3-4 minutes and repeat on the other side.  Remove the pieces to the plate with the chorizo. Cook the rabbit the same way. Next add the diced onion and garlic. Cook for 2-3 minutes or until the onions begin to soften, stirring occasionally. Add the rice, making sure to stir well, coating with the oil for 2 minutes or until it becomes opaque. Add in the tomatoes and bay leaves, stirring to combine.  Remove the whole onion from the broth.  Pour in 3/4 of the broth. It should cover the the rice completely.  Let the mixture boil for about 5 minutes, stirring to scrape up any crispy bits off of the bottom.
Nestle the chicken, rabbit and chorizo into the rice. Cover and cook for 15 minutes.  Add the remainder of the broth, shrimp, clam/mussels and arrange the pepper strips on top, sprinkling with the olives.  Cover and let cook for 5-10 more minutes. The rice on top should be a bit “al dente”.

Remove from heat, recover and let sit for 5-7 minutes.  Sprinkle with parsley and serve family style. You should have a layer of crispy toasted rice at the bottom of the pan, called “socarrat”.