Why Chinese Garlic is Bad: The Ugly Truth

There are not many foods that give the same mouth-watering delight than garlic. Garlic is not only delicious and used in almost every recipe one can think of; it is also a powerful super-food. Garlic has been used around the world for centuries for cooking and because of its effective medicinal properties. Garlic is high in Vitamin C, Vitamin B6, and many other trace minerals that are vital for healthy immune function. The most popular compound found in garlic is allicin, which is what gives it that lovely flavor and its powerful antioxidant punch. Studies have shown that garlic has the power to prevent colds and flu and reduce the length of time these viruses are in the system by roughly 70 percent. In addition, garlic has been shown to reduce high blood pressure, reduce high –bad- cholesterol, improve the immune system, remove parasites from the GI tract, and work as a natural antibiotic in all areas of the body.

With that being said, should you be concerned about where your garlic comes from? Well, YES! Although the information about the dangers of Chinese imported garlic  has been available for decades, the concerns have recently popped up again, and I’m here to shed some light on them.

Why Chinese Garlic is Bad:

Other countries produce about 75 percent of the world’s supply of garlic. In 2017, the US imported approximately 225 million pounds of garlic, both fresh and dried. It is estimated that the FDA only catches about 2 percent of imported hazardous produce before it makes its way in to the USA.

Some countries have virtually no regulations on the use of toxic pesticides and fertilizers used in farming. If that isn’t scary enough, the food handling safety, sanitation and hygiene regulations in some countries are even worse.

Imported garlic is often grown in sewage water and human sewage is specifically used as an inexpensive fertilizer.  It is then sprayed with chemicals to prevent sprouting, bleached with chlorine to make it look white, and, by law, fumigated with methyl bromide, according to Henry Bell of the Australian Garlic Industry Association. High doses of methyl bromide can cause respiratory and central nervous system damage. According to the UN, it’s 60 times more dangerous than chlorine.

Every time imported garlic from a specific country is tested, it tests positive for toxic chemicals, pathogens and heavy metals including: lead, arsenic, chlorine, methyl bromide, melamine, E Coli, and the list goes on.

*This applies not only to raw garlic, but also to garlic powder and garlic oil.

*Check your spices and pre-made sauces!

This is a picture of garlic grown in the US.  It has roots: 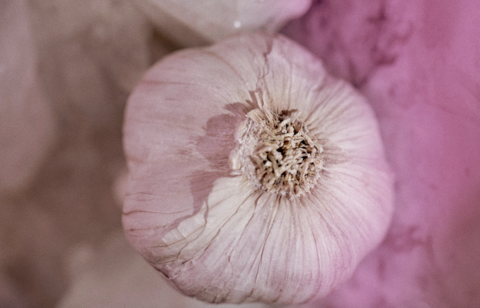 How To Identify Imported Garlic: 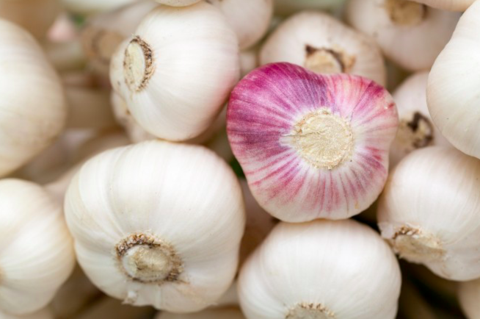 Lack of roots. It is required by the FDA that all roots be removed from imported produce to prevent soil-bornepathogens from entering the US. This is not a requirement for US garlic farmers so they often leave the roots attached. If the bottom of a garlic bulb has a bare, concave surface where roots would naturally be, it is most likely imported.  This is a picture of imported garlic...

Sprouting. Garlic bulbs naturally sprout and will sometimes grow little green shoots. Again, the heavy bleaching of imported garlic will kill the garlic and prevent this from occurring. If there are shoots coming from the top of the bulb, you are good to go.

Weight. Imported garlic contains more water so by the time it makes it to US supermarkets much of the water has evaporated making it much lighter and less firm than US garlic. Check for weight and density.