Scotch Eggs Recipe And A Bit Of History 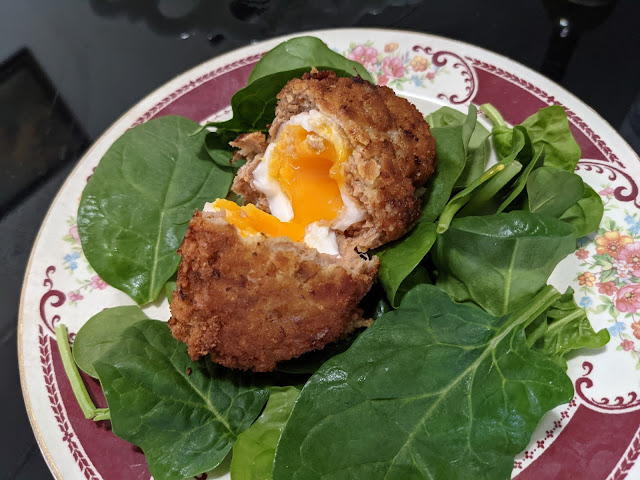 According to Culinary Delights of Yorkshire, they originated in Whitby, Yorkshire, England, in the 19th century, and were originally covered in fish paste rather than sausage meat. They were supposedly named after William J. Scott & Sons, a well-known eatery which sold them.  However, Fortnum & Mason, a London department store known for its food products, maintains that it created Scotch eggs in 1738 for wealthy travelers on carriage rides.  We like our yolks runny, but not too runny.  They are great for fishing or picnics or even a lunch or light dinner with a green salad.

In the large rounded part of 4 of the eggs make a hole with a pin.   Bring a pot of water to the boil .  Carefully lower the eggs in the water.  Cover and remove from heat.  Let stand 7 minutes.  Drain water, crack the shells with the back of a spoon and plunge into iced water.  Let cool for 4-5  minutes.  Starting at the large edge, peel the eggs. Remove sausage from the casings and mix with the spices and herbs.  Divide into 4 equal sized balls.  Place a piece of plastic film on the counter.  Place 1 ball in the center. Place another piece of film on top and flatten out into a thin disk large enough to easily wrap the eggs in.  Remove the top piece of film and pull up the sides to completely cover the egg.  Gently form in your hands to even thickness and in the shape of an egg.  In 3 separate plates place the flour, beaten eggs, and the breadcrumbs.  Heat the oil on medium high heat in a large high sided skillet (the oil should be about 1/3 up the sides) to 375F/190C or just shimmering.  First roll the sausage encased egg in the flour, then the egg, then coat with crumbs.  Gently place into the heated oil.  Let cook for 10-12 minutes rolling them around occasionally to ensure even and thorough cooking)  They should be lovely and dark golden brown.  Remove from oil and let drain on a rack over a piece of kitchen paper towel.  Serve hot warm or room temp with a bit of spicy English mustard if you want.