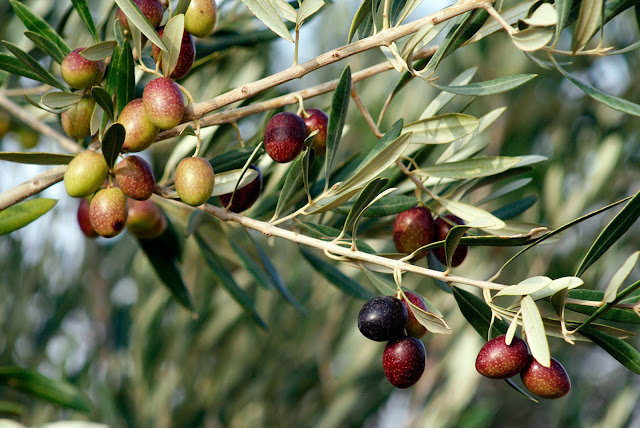 'Olive tree leprosy' could have a catastrophic effect on the future of olives in Greece, Italy, and Spain.

Because the agricultural industry in parts of Europe hasn't had enough challenges to contend with lately, an incurable bacterium called xylella fastidiosa is again threatening to kill hundreds of thousands of olive trees in Italy, Spain, and parts of Greece. And according to some researchers, if the disease continues to spread throughout olive groves, it could cause €20 billion-plus in lost revenue in those three countries in the next 50 years.

Xylella fastidiosa was first detected in Italy seven years ago, and an estimated one million trees have already died from its effects. According to plant virologist Maria Saponari, it probably came into the country on ornamental coffee plants. "This pathogen likes a warm environment," she told NPR. "And so, unfortunately, it found a very suitable condition to establish here."

The disease, which is also called 'olive tree leprosy,' slowly chokes off a tree's water supply. At first, the effects are limited to fewer olives and fruit of poorer quality, before it ultimately clogs up the xylem, the tree's root-to-stem water-transport system. Xylella fastidiosa is spread throughout olive groves by insects that feed on the trees' sap. like the descriptively named spittlebug.

According to an article that was recently published in the Proceedings of the National Academy of Sciences (PNAS), researchers from Wageningen University in the Netherlands tried to project the economic impact of the future spread of xylella fastidiosa. The team focused their efforts on Italy, Greece, and Spain, because those three countries are responsible for 95 percent of Europe's total olive oil production.

In Italy, if the absolute worst-case scenario happens—all olive production ceases because the orchards have died off—the 50-year economic impact could be between €1.9 billion and €5.2 billion. (For Greece, the losses could hit €2 billion, while Spain could lose an eye-watering €17 billion). But those numbers could be dramatically reduced if the rates of Xylella infection can be slowed down, or if more resistant varieties of olive trees can be planted, or in mitigation efforts that combine both methods.

But replanting entire olive groves—or having to uproot thousands of trees—comes with its own cost. "You really hear devastating stories of infected orchards that were inherited over generations," lead author Kevin Schneider from Wageningen University in the Netherlands said. "It's the same orchard that their grandparents were once working on. So how do you put an economic number on the loss of something like this? The cultural heritage value would be far larger than we could compute."

According to The Guardian, Italian authorities in Puglia have taken serious measures to combat the spread of the disease. Since 2015, if an olive tree is discovered to have xylella fastidiosa, any tree within 100 meters of it has to be removed, regardless of whether the other trees have been affected or not.

Researchers with the country's Council for Agricultural Research and Agricultural Economics Analysis (CREA) are also experimenting with ways to eradicate the bacteria from previously infected areas by using a patented "compound based on zinc, copper, and citric acid" and with preventative pruning measures that remove weeds and plants where spittlebugs can live.

Those efforts—and others like them—will most likely have to continue, in order for these orchards to have a chance of surviving the next several decades.