Meat Sales Are Soaring, But Nobody Seems to Be Buying Bacon 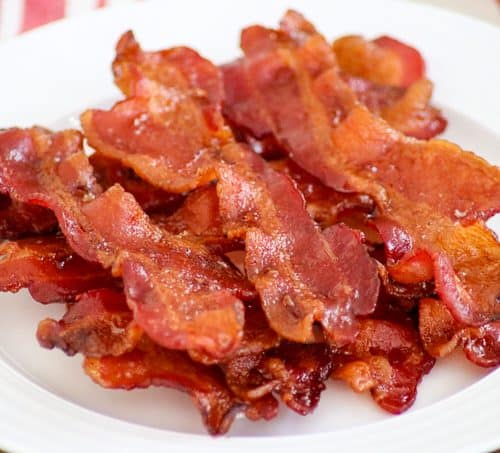 
If you've been able to get out of your house and into a supermarket lately, you've probably spotted a number of bare shelves scattered throughout the store. Sure, all of the toilet paper has been sold out for what feels like years, but meat and dairy cases have also been empty, and good luck if you need eggs, bananas, or peanut butter.
But according to Bloomberg, nobody seems to be panic-buying bacon right now. The U.S. Department of Agriculture says that the price of pork bellies has dropped to 41 cents per pound, which is the lowest they've been since 1999. (And here's a shoutout to those halcyon days in 1999, back when we all thought that the worst thing we'd ever have to endure was Jar Jar Binks.)
Shoppers haven't completely abandoned buying bacon, it's just that most of us would rather have it at a restaurant or from a fast food joint than to cook it for ourselves. "Over time, the share of bacon that moves through the retail channel has shrunk,” independent market consultant Bob Brown told the outlet. “We prefer to order bacon on our hamburgers or biscuits from the drive-through rather than take home a pound of bacon from the grocery.”
As that picked-over meat section indicates, that hasn't been the case for other cuts of pork, or for other kinds of meat. Information Resources Inc. reports that meat sales were up by a whopping 91 percent during the week of March 22, when compared to the same week last year. The biggest sales increases were ground beef (which saw sales increases of $180 million compared to one year ago), chicken breasts, pork loin, beef short loin, and beef chuck.
On top of that, turkey, duck, bison, and pork all more than doubled their sales numbers from this time last year. (A spokesperson for Great Range Brand Bison told Progressive Grocer that its sales had been increasing before the coronavirus pandemic began, but it also acknowledged that it probably got a boost because "the big three proteins"—beef, chicken, and pork—were often sold out.)
And despite the dramatic dip in the price of pork bellies, eggs have gone in the opposite direction. According to Reuters, wholesale prices of Midwest large eggs reached an all-time high of $3.09 per dozen last Thursday, more than triple the wholesale price of a dozen eggs at the beginning of March. That price increase hasn't been reflected in the retail cost—at least not yet, and not that dramatically.
But as more of us are stocking up on eggs (when they're available) and cooking breakfast at home more often, that might not be the case for long. At least a package of bacon will likely remain a reasonably inexpensive side dish.
Food&Wine