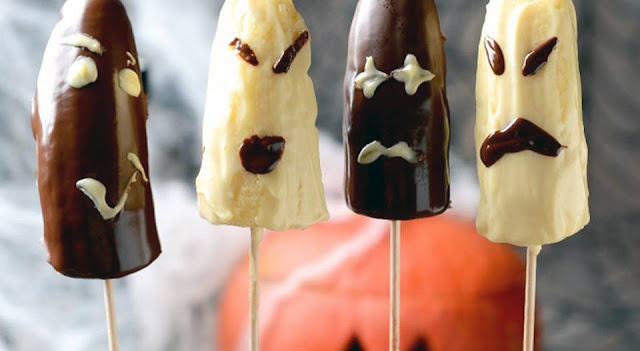 Frozen Ghosts are a GREAT Halloween treat for the kids or the kid in you! Light and tasty, makes for a fun treat or a great party menu item! If you are looking for a great theme treat for any upcoming Halloween party this season, then FROZEN GHOSTS are a BOO-TIFUL addition to the festivities!
Ingredients:
3 Bananas
1 pkg white chocolate chips
1 pkg dark chocolate chips
1 (8 oz) container non dairy whipped topping (1 tub)
6 wooden skewers
Directions
Melt in separate bowls, the white and dark chocolate chips.
Mix in the whipped topping in the separate bowls of the dark and white chocolate.
Cut the bananas in half and peel them.
Gently place skewers in bottom half of banana and
dip in either chocolate mixture. (Be careful! If you move too quickly, the banana will break!)
Place on wax paper and put in freezer for at least an hour.
Take out of freezer and set aside.
Fill 2 big freezer bags – one each with different melted chocolate, carefully cutting a SMALL bottom corner off and pushing down on the chocolate to draw face eyes and mouth on each banana – be creative!
Re-freeze for an hour, take out and enjoy!