Lager Beer vs. Ale Beer - Does It Matter? 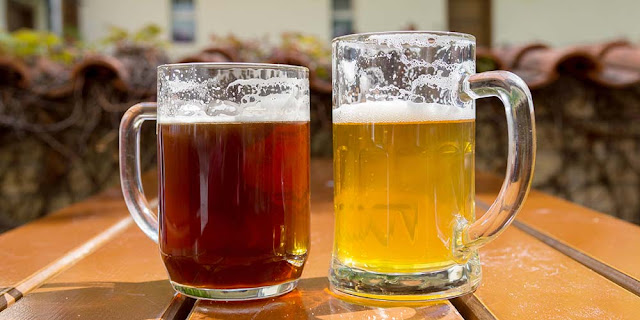 But there’s much more to tell. First of all, ale and lager are both beers; that is, they are fermented from grain. The major difference between these two beer families stems from the temperature at which fermentation is carried out. And the importance of these differences in temperature is that chemical reactions happen more slowly at lower temperatures.

Brewers generally want their beer to attenuate (convert sugar to alcohol) slowly in the ferment, thus changes will take place over a longer period of time. Hence, they tend to keep fermentation temperatures as low as possible, particularly in the aging process after attenuation is, for the most part, complete.
S. cerevisiae is the most common yeast out there. Variants of this yeast are used in bread making, winemaking and other common formulations. We think of it as the original beer yeast, used in the production of all original beer styles dating back to early Babylonian times—the original or natural yeast used in ale beer production. It is the universal yeast, appearing world wide, even into the Antarctic.
We call it “top fermenting” or “ale” yeast: it ferments throughout the body of the beer wort, rising first to the surface (where it can be harvested). In time, it will sink to the bottom of the fermentation vessel, remaining after the finished beer is removed. This yeast also has greater tolerance to alcohol, hence it is capable of producing stronger (higher alcohol content) beers.

Saccharomyces uvarum—so called “bottom fermenting” or “lager” yeast—is more fragile. It ferments throughout the body of the beer wort and settles to the bottom of the vessel at the end of that process. The wonder of bottom fermenting yeast is that, in addition to being very fragile, it attenuates more slowly and to a lesser extent than ale yeast. Not only that, but it has lower alcohol tolerance and almost no ability to sporulate (form cysts of one to three cells that are surrounded by a protective wall as protection against cold). Without this protection, it will continue to work at fairly cool temperatures, even below 39 degrees F/3 degrees C. It has the additional ability to ferment the sugar melibose, an ability missing in the top fermenting “ale” yeast.

These traits might appear to be a disadvantage for this yeast strain, and in some ways they are. But the effect is to leave a greater remnant of sugar in beer. Combined with the very slow attenuation, this results in better clarification, a more full-bodied beer with far fewer esters and a better and more mellow palate. The final result of all that is the wonder of so-called “lager” beer (from the German lagern: to store), a beer that is crisper in character and less fruity in aroma than ale. If the only beer you had ever tasted were heavy and hoppy ale beer, lager would indeed be a revelation to you.

Better Yet is the Story!

It all began in the Middle Ages when Bavarian brewers discovered that their beer continued to ferment while being stored in cold ice-caves during the winter. The result was a greatly improved, very smooth, mellow tasting brew. They would brew in late fall and store the beer, covered with ice harvested from nearby lakes and rivers, until early spring. They called it lager beer because of the long storage period. This beer, fermented at some 40 degrees F/4 degrees C had worked only half as fast as similarly brewed ale beer brewed at 58 degrees F/14 degrees C.

In the second half of the 19th century, scientists (Pasteur and others) began to study this beer’s obviously different yeast with great interest. By that time, the most renowned version of the beer had come to be called “pilsner,” after the Bohemian (now Czech) city of Pilzn. The original yeast had been brought to Bohemia from Bavaria by traveling monks. Quality glassware had come into production, and improved malting techniques made very pale beer feasible. This new beer was clearer, more beautiful and mellower, thanks to those improved malting techniques and lowered hop rates. The cold ferment prevented souring, allowing reduction of the high hop levels that were required for safe ale ferments. This was especially so once the introduction of refrigeration permitted year-round production.

It was a whole new ball game: beautiful beer from cultured yeasts, along with mellow taste and lower alcohol content led to the introduction of pilsner-style beer across the planet. It was the brewing phenomenon of the late 19th and early 20th centuries. Lager brewers soon cornered the major beer markets in much of the world, with the major exception of Great Britain and Belgium, where the brewers continued to cling to their beloved ales.

Central Europe, and to some extent the United States, came to dominate world beer production with this fascinating new beer type. Large American brewers of this era began to buy up their smaller neighbors. Nevertheless, by 1860 there were 1,269 breweries in this country, with a total population of 31 million people. Although expansion and consolidation continued, there were a little over 1,900 breweries by the end of that century. Prohibition loomed and numbers fell precipitately, so that fewer than 1,000 remained by the time Prohibition was enacted in 1919.

After Prohibition was repealed at the end of 1933, some 756 brewers eventually returned to production in the next few years. However, consolidation once again became the major activity of American brewers. Only 605 remained in 1939. World War II also took its toll and by 1962 only 220 brewers remained operational.

That wasn’t the worst result of the war. The brewers were forced to lower the alcohol content of much of their production. During the war, the Republicans wanted to return to return the country to Prohibition, but British Prime Minister Churchill urged President Roosevelt not only to allow continued beer production, but to make sure that our armed forces in this country, and in the field across the world, were provided with a reasonable ration of beer.

Actually, when I was serving on Okinawa near the end of the war, we were provided with a weekly ration of six beers, so called “3.2 beer” ABW, which translates to 4% ABV. (I remember that when the Japanese surrendered, supplies became scarce, and our ration was reduced from six beers to six cans of Australian chocolate milk toddy, and a little later to six cans of tomato juice! But I digress. Another time I’ll tell you about the grand party we enlisted folk had to celebrate the war’s end. That one featured some of our purloined officer’s hard liquor, along with stolen steaks and such. Fireworks? They wanted us to return our unused ammunition. Fat chance.)

This era led to the large brewers using greater amounts of cheaper non-malt adjuncts. Eventually it led to the ever lighter and paler beer. By 1962 only 220 brewers remained, down to 55 in 1974, with 10 predicted to remain by 1990. Worse, the beer was becoming totally tasteless.

Then came lite beer, dry beer and ice beer. The lager beer revolution had reached its ultimate end-point. Enough! What the country needed at that point was beer with taste and character. We needed ale beer! Ale beer was a natural result of the many new brewers joining the fray. They didn’t have the room or the refrigeration to produce lager beer; and for the most part were forced to fast ferment their beer because of space limitations.

Ale was just what we beer drinkers needed: beer with flavor and character. We had come a full circle. But rest assured, lager beer will become more popular again for the same reasons it first became dominant on the planet. Folks will tire of ale, and look for mellow lagers again. But maybe this time, the beer styles will be more abundant. Any brew that can be aled can be lagered. Two different results and twice as many satisfied customers. That should be great fun.