Where Does Airline Food Come From? Some Grow Their Own. 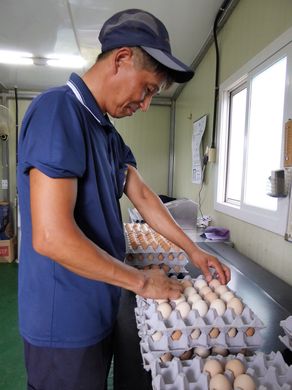 JEJU ISLAND, South Korea -- Plenty of airlines tout their partnerships with top chefs and the farm-fresh ingredients that go into gourmet meals served to passengers in the first- and business-class cabins.
But, for now, only Korean Air can boast that food served on board is grown on a company farm.
Jedong Ranch sits on 3,700 acres of South Korea’s lush Jeju Island and has been operating since 1972, when it was purchased by the former chairman of the airline’s parent company, the Hanjin Group.
Back then, South Korea had a beef shortage, so breeding livestock was the first order of business. Early on, the herd was made up exclusively of imported Angus cattle. Today the ranch is home to more than 2,200 head of prized, grass-fed Korean native cattle known as Hanwoo.
More: Korean Air: Boston-Seoul non-stops to begin in April 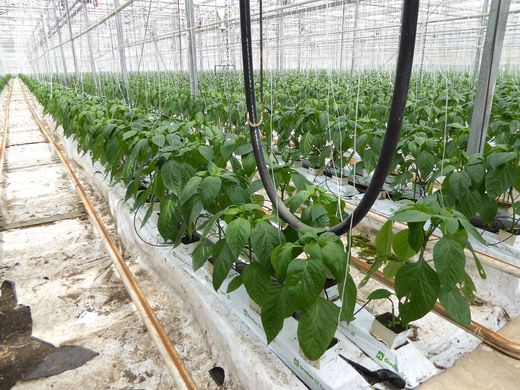 The organic, antibiotic-free meat from these animals, and from the farm’s flock of approximately 6,000 free-range chickens, is sent to Korean Air’s flight-catering kitchens in Seoul for use in meals served to first- and business-class passengers. Some of the meat and eggs from the farm are also available, at premium prices, for purchase locally.
In addition to raising cows and chickens, the ranch also produces fruit and vegetables – and bottled water – for Korean Air passengers.
Each year, three high-tech, hydroponic greenhouses produce more than 210 tons of red peppers and cherry tomatoes and about a ton of blueberries for first- and business-class in-flight meals.
In the future, the ranch plans to add passion fruit to the crop rotation and experiment with planting olive trees, said Jedong Ranch managing director Jongdo Lim during a recent tour of the facilities.
The water bottling plant at the ranch, which has been operating for 35 years, makes and fills all the cups and bottles of the airline’s branded "Hanjin Jeju Pure Water." Onsite groundwater is pumped from 1,070 feet underground and filtered through layers of the island’s volcanic rock before heading to the plant.
Why go to all the trouble? By now it’s a Korean Air tradition, says Lim, but by producing the water and much of the meat, poultry and produce served to passengers, the carrier is also able to set and meet high quality-control standards that go along with being a premium luxury carrier. 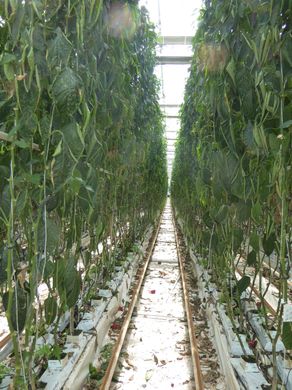 Other airlines explore agriculture
While first to offer its own "farm to flight" foods, Korean Air is not the only airline in the farming business.
In 2015, JetBlue created a 24,000-square-foot milk-crate garden outside Terminal 5 at New York’s John F. Kennedy International Airport. Designed to both create a welcoming green space and promote local agriculture, the garden generates more than 2,000 pounds of blue potatoes, kale, carrots, leeks, arugula, garlic, mint, basil and other herbs for local food banks.
In May, Japan Air Lines announced a partnership with Wago agricultural company to open an agritourism attraction on land near Tokyo’s Narita International Airport. Scheduled to open sometime in 2020, the "JAL Agriport" will offer visitors a chance to pick strawberries, harvest sweet potatoes, picnic or purchase fresh produce grown in the region. JAL says it also plans to use some agriport produce in lounge menus and in-flight meals.
And in June, Emirates said it was joining with Crop One to build the world’s largest vertical farming facility near the airport in Dubai. The goal: “To secure our own supply chain of high quality and locally-sourced fresh vegetables, while significantly reducing our environmental footprint,” the airline said in a statement.
Scheduled to open by late 2019, the 130,000-square foot facility will be made up of growing "units," use 99 percent less water than outdoor fields, and have the output equivalent of 900 acres of farmland. At full production, the daily harvest should be about three tons of pesticide-free leafy greens that will be used in many of the meals Emirates Flight Catering prepares for 105 airlines and 25 airport lounges.
Anyone hungry?
Harriet Baskas is a Seattle-based airports and aviation writer and USA TODAY Travel's "At the Airport" columnist. She occasionally contributes to Ben Mutzabaugh's Today in the Sky blog. Follow her at twitter.com/hbaskas.
USA Today