Here's why parents shouldn't freak out just yet
DAVID MEYER 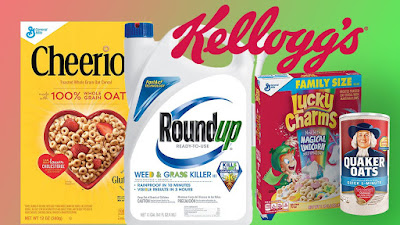 Remember a couple months back when an advocacy group found what it called “a hefty dose” of glyphosate, the active ingredient in weedkillers such as Roundup, in a wide range of oat-based products such as Cheerios and Quaker Oats? Quaker and General Mills gis weren’t happy, arguing that any traces of glyphosate in their products were well below the regulatory limits.
Well, the Environmental Working Group (EWG) has come back with another non-peer-reviewed study, this time covering oat-based cereals and other food that’s marketed to children. And the lobbying group—which is partly funded by organic foods companies such as Organic Valley and Stonyfield—says its latest test results “fly in the face of claims by two companies, Quaker and General Mills, which have said there is no reason for concern.”
“Almost all of the samples tested by EWG had residues of glyphosate at levels higher than what EWG scientists consider protective of children’s health with an adequate margin of safety,” the organization said. It tested 28 products—all of which were made from “conventionally grown,” i.e. non-organic, oats—and found only two had glyphosate levels below its self-authored benchmark of 160 parts per billion.
“If those companies would just switch to oats that aren’t sprayed with glyphosate, parents wouldn’t have to wonder if their kids’ breakfasts contained a chemical linked to cancer,” said EWG president Ken Cook.
The thing is, the EWG’s limit is way, way below the safety ceiling imposed by the Environmental Protection Agency. For oats, the EPA says anything up to 30 parts per million is safe. That’s 187 times the EWG’s safety limit, and 10 times the glyphosate levels found in Quaker Oatmeal Squares Honey Nut, the worst offender on the list released by the lobbying group on Wednesday.
The debate over organic vs “conventionally grown” foods is complex and multifaceted, and there is clearly some cause for concern over the long-term effects of glyphosate, as evidenced by the repeated verdicts against Bayer’s Monsanto over Roundup—this week a Californian court upheld a previous ruling that said the substance had caused the cancer of a school groundskeeper who regularly came into contact with it.
The World Health Organization’s (WHO) International Agency for Research on Cancer said in 2015 that glyphosate was “probably carcinogenic to humans,” but the following year the WHO and UN concluded that the weedkiller was “unlikely to pose a carcinogenic risk to humans from exposure through the diet.” This was in line with the findings of the European Food Safety Authority.
The simple fact is that, much as the food manufacturers are arguing, there is no evidence as yet to say their products are unsafe because they carry small traces of glyphosate residue. Parents concerned about protecting their kids from carcinogenic substances might do better to fret about proven dangers, such as air pollution.
This Story Originally Appeared On Fortune