Island Seafood Co. on Matlacha has been quiet.
Too quiet.
As a massive red tide bloom kills fish, dolphins and sea turtles in the Gulf of Mexico, with toxic blue-green algae choking inland waters, this usually popular seafood market and fish house has been equally dead. What few customers trickle in have the same question: Is the seafood safe?
“Is red tide affecting you guys? Does it affect these fish? We hear that from everyone,” Island Seafood’s owner Katie Fischer said.
“We’ve owned this for five years and this has been our worst month since we’ve owned it. Our goal has become to educate people, to let them know the seafood we’re bringing in and the seafood restaurants are serving is safe to eat.”
And it is. At least in those cases.
The overarching answer to the “Is the seafood safe?” question is, however, much more complex. Little is known about the impacts blue-green algae can have on freshwater fish and blue crabs, but early research doesn’t paint a promising picture.
Previous coverage: Some tourists avoid dining waterfront, 'blindsided' by environmental devastation
More: Fort Myers Beach restaurant crafts 'Fish Kill' cocktail to fight algae, red tide
More is known about the effects of red tide on seafood, but with each new fish kill that washes ashore the local appetite for seafood, even perfectly healthy seafood, diminishes.
“No one wants to eat fish when there’s a million dead fish floating in your canal,” Fischer said. “Believe me, we get it. But those fish aren’t our fish, not even close.” 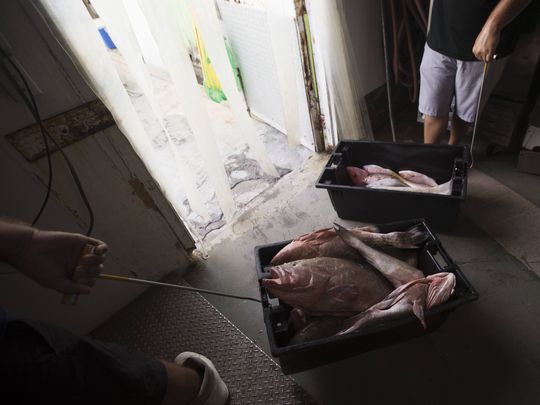 Roger Schmall bid farewell to the Kayden Nicole Wednesday.
His 75-foot St. Augustine Trawler left the docks of Trico Shrimp on Fort Myers Beach that morning for a 16-day shrimping trip that would take the crew south to the pristine waters of the Dry Tortugas and Key West.
Schmall isn’t captaining this excursion, but he knows the route well.
“Most of the boats are in Texas for the Texas season right now. A handful have stayed here and are fishing the Tortugas. They’re 100 miles south of here, at least, nowhere near the red tide,” Schmall said.
“You have more to worry about eating imported seafood than eating our shrimp.”
When the Kayden Nicole returns later this month, its shrimp will be unloaded at TriCo and then sold at its market, as well as to wholesalers and a few local restaurants and resorts, including Crave in south Fort Myers and Pink Shell on Fort Myers Beach.
Trico’s owner-operator Chris Gala said diners have nothing to fear eating Gulf shrimp right now.
“In our market, customers ask every day if it’s safe and we tell them, 100 percent, yes it is,” she said.
"Still we're seeing a decline in sales because of red tide and what people don't understand about our work."
Shrimp boats aren’t the only vessels escaping to cleaner waters. Long-line fishermen are spending the extra fuel, as well.
Back at Island Seafood, Fischer said her three company-owned boats are currently fishing for grouper and snapper 80 to 100 miles offshore. According to reports from the Florida Fish and Wildlife Conservation Commission, or FWC, the red tide bloom extends 20 to 30 miles offshore.
To add insult to injury, grouper and snapper catches are miserably low this year across Florida. The lack of supply has sent the price of the fish skyrocketing. But with few customers, Island Seafood hasn’t been able to take advantage.
“I was on the East Coast and saw grouper selling for $38.95 a pound. Who can afford that?” Fischer said. “We’re at $20.95 a pound, just eating the cost of extra fuel to try and keep things affordable for locals.”

Can you eat fish caught during red tide?

Commercial fishermen have the ability to escape from red-tide waters. But what about local anglers? Can they eat the fish they’re catching?
The FWC says a cautionary yes.
“(I)t is safe to eat local finfish as long as the fish are filleted before eaten,” a blurb under the Red Tide FAQ section of myfwc.com reads.
“Although toxins may accumulate in the guts of fish, these areas are disposed of when the fish are filleted. However, it is never a good idea to eat dead or distressed animals, especially in a red tide area.”
Shellfish such as clams, scallops and oysters from red tide areas should not be eaten.
Since those bivalves are filter feeders, taking in the algae-filled water and filtering it for nutrients, they can accumulate dangerous levels of toxins in their flesh. The FWC has halted the commercial and recreational harvest of shellfish in the southern parts of the Gulf through at least Sept. 30 due to red tide. Most commercially available Gulf oysters come from the northern edge of the Gulf, far from the current red-tide bloom.
Rick Bartleson, a research scientist who studies the impact of red tide on marine life for the Sanibel Captiva Conservation Foundation, knows the dangers of red-tide contaminated shellfish well. 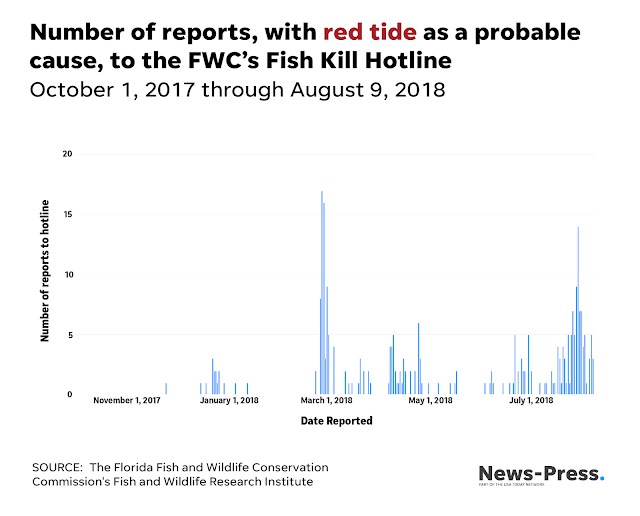 “I do know at least one person who was not aware of the closure and made the mistake of making an oyster stew using local oysters,” Bartleson said.
“He’s fine now, but he felt it.”
Bartleson said it can take months for red tide to flush out of bivalves. During past blooms, it took four months for local oysters to return to safe levels, “but the red tide wasn’t nearly this bad,” he said.
What you should know: What travelers should know about Florida's red tide outbreak
What you should know: Particularly strong, long-lived red tide still enveloping region
personal chefs and event catering
Miami + Miami Beach + Fort Lauderdale + Palm Beach
info@yadachef.com | 954-367-YADA (9232)
www.yadachef.com