Do Chip Bags Have Less Air in Them Than They Used To? 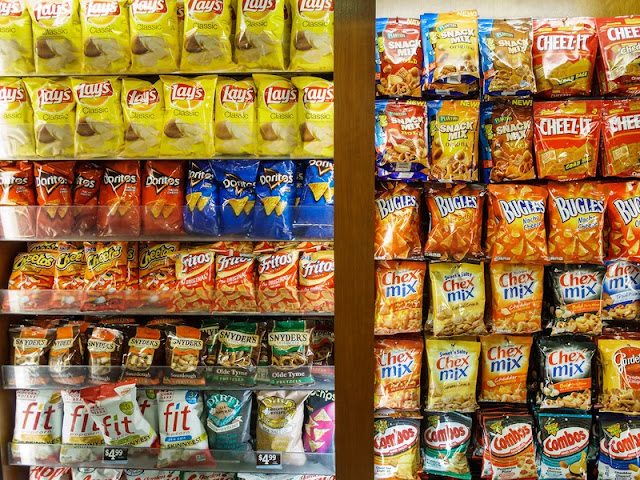 This study says it depends on the chip but yeah, probably
MIKE POMRANZ
It doesn’t take much to crush a bag of potato chips into smithereens. To prevent this from happening, chip brands have a secret gas up their sleeve: nitrogen. Bags of chips get pumped full of the stuff to prevent the contents inside from getting completely crushed (and the nitrogen helps preserve the chips as well). But at what point do things change from that gas doing the consumer a favor to simply deceiving us about how many chips are actually inside?
The answer to that question is one of personal opinion—and to be fair to the boys working for big potato chip, snack bag contents are measured by weight, not by volume, so anyone with a bit of scientific knowledge should know exactly what they are getting themselves into. Still, the amount of air in chip bags is apparently a regular customer complaint, and so every now and then, someone comes along to perform a test on which brands have the most and least air in their packages.
Most recently, the team over a Kitchen Cabinet Kings decided it would be a decent publicity stunt to undertake this experiment. So thanks to them, we now have a fresh list of the percentage of air that is found in the bags of some major chip brands.
Working under the assumption that too much air is a bad thing, the leader in least air is Fritos. Only 19 percent of a Frito bag is nitrogen. Interesting enough, however, the brand with the most air was Cheetos: a bag of Cheetos is 59 percent air. So out of the 14 brands tested, Frito-Lay managed to finish at both the top and the bottom of the list.
After Fritos, working from least air to most, we have Pringles (28 percent), Tostitos Scoops (34 percent), Lays Baked (39 percent), Sun Chips (41 percent), Lays (41 percent), Popchips (45 percent), Cape Cod (46 percent), Kettle Brand (47 percent), Doritos (48 percent), Terra (49 percent), Stacy’s Pita Chips (50 percent), and Ruffles (50 percent), meaning that Cheetos, which finished last, was also the only brand found to be more than half air in its bag.
However, the study’s most interesting finding might be the average amount of air in bags: 43 percent. This figure is significantly lower than artist Henry Hargreaves found when he performed an extremely similar experiment back in 2015. Hargreaves' research found that the average amount of air in each bag was 70 percent. “This made us wonder, have companies actually listened to their hangry customers, and, better yet, have they done something about it?” Kitchen Cabinet Kings asked.
Their theory is that the differing results mean that we’ve seen a 27 percent increase in the amount of chips in your bag—though they don’t provide any evidence to back this claim up. A seemingly more sensible conclusion would probably be that we’re just seeing less air in the bags than we used to (again, since contents are determined by weight, which air doesn’t affect, not by volume).
Regardless, if it is true that chip companies have been acquiescing to consumer complaints about air in chip bags, why not keep going?! Let’s dream of a day where potato chip bags contain no air whatsoever. Sure, those bags will arrive with all of the chips crushed to bits, but at least we will have stuck it to big chip for giving us all so much free nitrogen.
This Story Originally Appeared On Extra Crispy
personal chefs and event catering
Miami + Miami Beach + Fort Lauderdale + Palm Beach
info@yadachef.com | 954-367-YADA (9232)
www.yadachef.com