Vanity Is Why Some of America's Tastiest Fish Ships Overseas

Our love of tuna, salmon, and shrimp has led to the country’s most delicious, most sustainable seafood being sent overseas.


The Saltbox Seafood Joint had been on Jack Thigpen’s radar for a while. Two chalkboard menus listing the day’s catch flank the order window of the itty-bitty Durham, North Carolina, restaurant. Bluefish, mullet, mackerel, wild catfish, croaker, black drum—the offerings aren’t typical seafood-shack standards. But for Thigpen, an extension director for the North Carolina Sea Grant Program, where he works to connect fishermen with more lucrative local buyers, the chance to finally try spiny dogfish was one he wasn’t going to pass up.

The spiny dogfish is actually a slim gray shark. Those caught off the shores of North Carolina are typically sent to Boston or New York for processing and then shipped to the U.K. to satisfy the fish-and-chip habit of hungry Brits. But on this occasion, it was served up spicy with a side of slaw and pile of fried potatoes, a relative seafood bargain at only $12.50. Thigpen’s daughter, like most Americans, was less adventurous: Sticking with something familiar, she ordered the trout.


Spiny dogfish isn’t the only delicious American-caught fish that’s being sent abroad. In 2013, a whopping 3.3 billion pounds of healthful, delicious seafood such as squid, sardines, sea urchins, salmon roe, abalone, crab, sea cucumber, and herring were exported to overseas markets. Americans are comfortable with “buying local” when it comes to sweet corn or juicy summer heirloom tomatoes, but the idea of seasonal, locally sourced seafood is one that’s still sputtering.

As a nation, we tend to like our seafood bland and familiar. Shrimp, salmon, and tuna haven’t budged from the top 10 list for Americans in more than a decade. As Paul Greenberg points out in his book on the topic, American Catch, we import mild fish such as tilapia, shrimp, and pangasius while exporting species that carry more flavor, such as mackerel and sardines, to European and Asian countries that consume as much as 30 to 40 pounds of seafood per person per year. Americans consume half that amount—just 15 pounds a year.

“In Asia, there’s a greater emphasis on seafood and a greater ability to parse the really good stuff from the mediocre,” Greenberg said in an interview. “Black cod, wild salmon, and geoduck are held in higher regard. We’re getting outbid for a lot of those seafood items.” 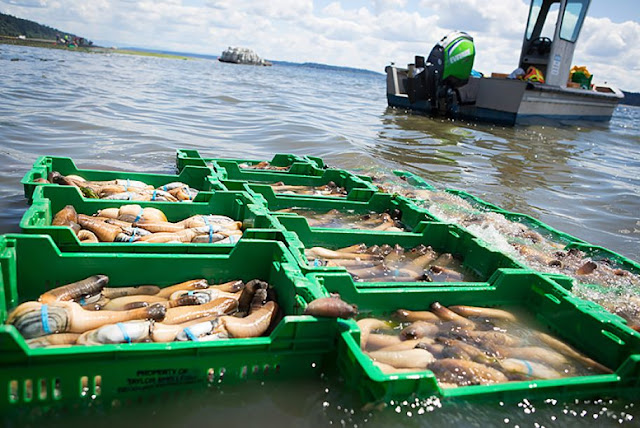 By exporting billions of pounds of healthy, delicious, and sustainable seafood, Americans are losing out on the health benefits lesser-known seafood species provide, instead relying on imported seafood from less desirable fisheries—some, including the Thai shrimp and fishmeal industry, widely known to use slave labor, forcing immigrant workers to toil in unbearable conditions.

Lax antibiotic regulations abroad have meant some seafood products headed for the U.S. market have been found to contain antibiotic residue. As of May, the FDA has refused entry to 245 shrimp shipments from Malaysia—a 180 percent increase from last year. Illegal, unreported, and unregulated fisheries (known as IUU) are also a growing concern. So much so that a presidential task force aimed at combating the problem released its action plan this spring, calling for more strict management of international fisheries and a traceability program that would ensure seafood in the U.S. market wasn’t caught illegally.

But what’s gained in sustainability may be lost in looks—because a geoduck clam, for one, isn’t going to win any beauty contests. A native of Pacific Northwest waters and up into Canada, the long (and long-lived) bivalve is, well, vulgar in appearance. But diners in Asia don’t seem to care.

Growing demand overseas for geoduck has prompted companies such as Washington state’s Taylor Shellfish Farms to focus on that market. In the 1980s, geoduck went for around 50 cents a pound; today, it ranges between $15 and $25 a pound—and that’s wholesale.

Jeff Pearson, Taylor’s CFO, says overseas sales account for a third of the company’s revenue—and nearly 50 percent of geoduck sales. In 2013, the U.S. exported nearly $72 million of geoduck, up from $65 million in 2012, with China and Hong Kong the leading buyers.


Similar scenarios are playing out in coastal cities like San Diego and Santa Barbara, California. With effort, it’s still possible to score local seafood such as spot prawns, spiny lobster, or sea urchin, but overseas demand has pushed prices beyond what many consumers can stomach.

John Henderschedt, director of the Office of International Affairs and Seafood Inspection at NOAA Fisheries, said price isn’t the only factor at play. There’s an historical context to consider as well—for certain fisheries, international markets were developed and established decades ago.

“Atlantic mackerel is a good example. There is a market for it in the U.S., and it’s one of my favorite fish, but there’s no way the U.S. market could support the entire fishery. It’s a market that was developed overseas long before it was developed in the U.S.,” Henderschedt said.

But look at nearly any coastal corner of the country—efforts to push American eaters out of their seafood comfort zone are beginning to spawn.

For chef Ricky Moore, who served Thigpen that tasty spiny dogfish, sourcing underutilized fish isn’t the hurdle; it’s coaxing customers to give it a try.
“In my experience, there’s a lot of cultural conditioning when eating seafood,” Moore said. “Nothing in the market speaks to the quality and celebration for the level of species we have. I thought, ‘Let me investigate this concept,’ and people have really connected with it.”

Moore’s efforts have been successful enough to make bony fish like croaker or butterfish that don’t produce a tidy fillet hot-selling items at Saltbox. “The very idea of sustainable seafood means getting away from filleted product,” he said. Much like the nose-to-tail movement, sustainable seafood asks diners to learn to love new flavors and texture—because a hog isn’t all chops, and the ocean isn’t stocked with center-cut salmon steaks.


Moore isn’t alone in coaxing eaters to try something new. In the Northeast, the Gulf of Maine Research Institute is hosting a number of dinners where lesser-known species like Acadian redfish, whiting, and Atlantic mackerel star.

Since 2013, the national nonprofit Chefs Collaborative has been host to a handful of “Trash Fish Dinners,” designed to educate guests about the variety of delicious but underutilized seafood that typically hasn’t merited a second look. And from Rhode Island to North Carolina to Oregon, finding local seafood at the farmers market is getting easier too.

“The biggest thing that would help fishermen and Americans eat more of their own fish is to shorten the supply chain and have more access to local fishermen,” Greenberg said.

His advice? Seek out a Community Supported Fishery, the fishy version of a CSA, where consumers can buy a weekly share of seafood, taking home whatever fishermen happen to land that week. The first CSF launched in Maine in 2007; today there are close to 50, and demand is growing. Finding one near you just got easier: In early June, Joshua Stoll launched LocalCatch.org, a website identifying individual CSF locations, dockside pickup spots, and more.

“If we’re serious about getting local domestic seafood in the U.S., we need to think about the whole range of how to do it. CSFs are part of that,” said Stoll. “When you go to the supermarket, you’ll see the same five species of seafood and that’s it. CSFs or other types of off-the-dock programs are the antidote to what we have currently, which is a system where 90 percent of the seafood we have is imported.”