Hot Dogs - The More You Know 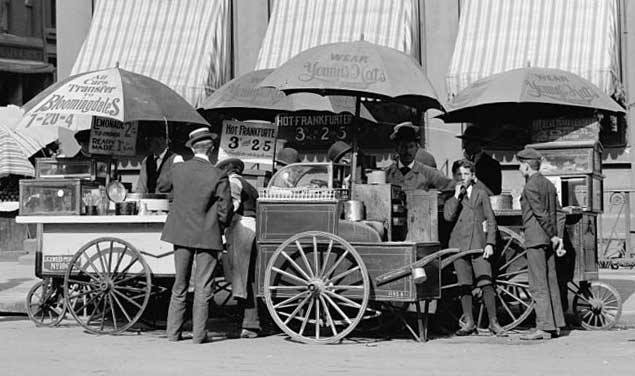 With so many using their grills today, perhaps a little hot dog history.
Dachshunds, Dog Wagons and Other Important Elements of Hot Dog History
Sausage is one of the oldest forms of processed food, having been mentioned in Homer's Odyssey as far back as the 9th Century B.C.
Frankfurt-am-Main, Germany, is traditionally credited with originating the frankfurter. However, this claim is disputed by those who assert that the popular sausage - known as a "dachshund" or "little-dog" sausage - was created in the late 1600's by Johann Georghehner, a butcher, living in Coburg, Germany. According to this report, Georghehner later traveled to Frankfurt to promote his new product.
In 1987, the city of Frankfurt celebrated the 500th birthday of the hot dog in that city.
It's said that the frankfurter was developed there in 1487, five years before Christopher Columbus set sail for the new world. The people of Vienna (Wien), Austria, point to the term "wiener" to prove their claim as the birthplace of the hot dog.
As it turns out, it is likely that the North American hot dog comes from a widespread common European sausage brought here by butchers of several nationalities. Also in doubt is who first served the dachshund sausage with a roll. One report says a German immigrant sold them, along with milk rolls and sauerkraut, from a push cart in New York City's Bowery during the 1860's. In 1871, Charles Feltman, a German butcher opened up the first Coney Island hot dog stand selling 3,684 dachshund sausages in a milk roll during his first year in business.
The year 1893 was an important date in hot dog history.
In Chicago that year, the Colombian Exposition brought hordes of visitors who consumed large quantities of sausages sold by vendors. People liked this food that was easy to eat, convenient and inexpensive. Hot dog historian Bruce Kraig, Ph.D., retired professor emeritus at Roosevelt University, says the Germans always ate the dachshund sausages with bread. Since the sausage culture is German, it is likely that Germans introduced the practice of eating the dachshund sausages, which we today know as the hot dog, nestled in a bun.
Standard fare at baseball parks.
Also in 1893, sausages became the standard fare at baseball parks. This tradition is believed to have been started by a St. Louis bar owner, Chris Von de Ahe, a German immigrant who also owned the St. Louis Browns major league baseball team.
Inventing the hot dog bun.
Many hot dog historians chafe at the suggestion that today's hot dog on a bun was introduced during the St. Louis "Louisiana Purchase Exposition" in 1904 by Bavarian concessionaire, Anton Feuchtwanger. As the story goes, he loaned white gloves to his patrons to hold his piping hot sausages. Because most of the gloves were not returned, the supply began running low. He reportedly asked his brother-in-law, a baker, for help. The baker improvised long soft rolls that fit the meat - thus inventing the hot dog bun.
Kraig can’t quite swallow that tale and says everyone wants to claim the hot dog bun as their own invention, but the most likely scenario is the practice was handed down by German immigrants and gradually became widespread in American culture.
How term "hot dog" came about.
Another story that riles serious hot dog historians is how term "hot dog" came about. Some say the word was coined in 1901 at the New York Polo Grounds on a cold April day. Vendors were hawking hot dogs from portable hot water tanks shouting "They're red hot! Get your dachshund sausages while they're red hot!" A New York Journal sports cartoonist, Tad Dorgan, observed the scene and hastily drew a cartoon of barking dachshund sausages nestled warmly in rolls. Not sure how to spell "dachshund" he simply wrote "hot dog!" The cartoon is said to have been a sensation, thus coining the term "hot dog." However, historians have been unable to find this cartoon, despite Dorgan's enormous body of work and his popularity.
Kraig, and other culinary historians, point to college magazines where the word "hot dog" began appearing in the 1890s. The term was current at Yale in the fall of 1894, when "dog wagons" sold hot dogs at the dorms. The name was a sarcastic comment on the provenance of the meat. References to dachshund sausages and ultimately hot dogs can be traced to German immigrants in the 1800s. These immigrants brought not only sausages to America, but dachshund dogs. The name most likely began as a joke about the Germans' small, long, thin dogs. In fact, even Germans called the frankfurter a "little-dog" or "dachshund" sausage, thus linking the word "dog" to their popular concoction.
http://www.hot-dog.org/culture/hot-dog-history