Mediterranean Pizza with a Twist Recipe 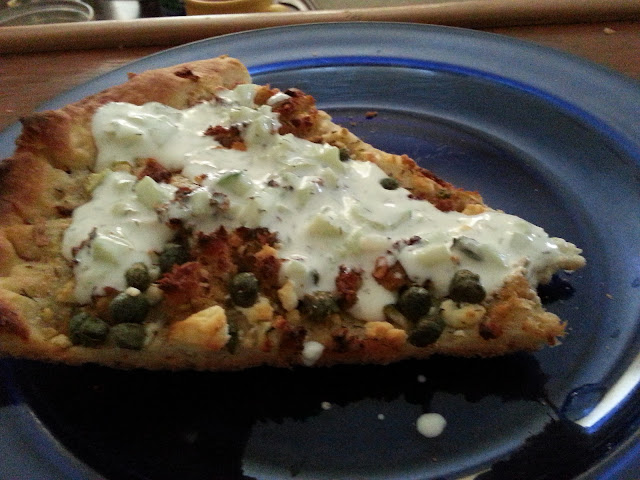 Using leftovers from the week for our Saturday Night Pizza is a long standing tradition.

Taking the concept of a meal and recreating it on a pizza  is something Chef Joseph learned in Key West while working at Clancy’s .

Salmon Loaf Pizza came Fridays Supper and the recipe for that is based on a 1960’s recipe.
Asking friends around for dinner was gaining popularity in the sixties. Before the War it would have been an activity limited to the better off, but with the end of rationing in the fifties and a DIY boom, people were keen to show off their smart homes. A dinner party was a good way to do it.

Home cooking was popularized by Fanny and Johnnie Craddock in the UK and Julia Child the Queen of the Kitchen and Mother of the modern day celebrity chef in the USA during the sixties.  We think this would have been a favourite for a Fancy Pizza Party.

Roll or press out your dough onto a pizza pan.  Spread olive oil evenly over the dough, then spread half of the sour cream sauce.  Break  the salmon loaf and distribute evenly. Do the same with the capers , feta and dill.  Save some dill to garnish.

Place the pizza in the preheated oven. Bake for 15 minutes.  Remove from oven.  Slice and serve with a drizzle of the sauce and a bit more dill.

The recipes for the salmon loaf and dill can be found in our previous post of  Salmon Loaf Bringing Back A Classic.
personal chefs and event catering
Miami + Miami Beach + Fort Lauderdale + Palm Beach