Afternoon tea is a traditional British meal taken in mid-afternoon. It consists of a pot of tea plus finger sandwiches, scones with jam and clotted cream, cakes and pastries. Here are two noteworthy points about afternoon tea. 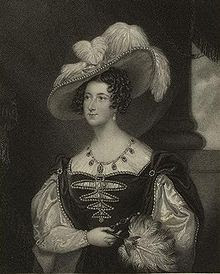 The concept was inadvertently created by Anna, the seventh Duchess of Bedford, in 1840. As the main meal of the day shifted from midday (luncheon) to evening, English high society didn’t dine until 8 p.m. The hungry duchess needed something to tide her over during the stretch between lunch and dinner, and ordered tea with small sandwiches to be brought to her room. Over time, her friends joined her, and “afternoon tea” expanded from her circle to all of society—an elaborate social and gustatory affair with sweet and savory delicacies, special “tea cakes,” and even tea gowns to bridge the fashion gap between casual afternoon and formal evening dress. The custom spread downstream and tea rooms and tea gardens opened to serve tea to all classes.
Afternoon tea is not the same as “high tea.” High tea is a hearty working class supper traditionally served in the late afternoon or early evening (in modern times generally around 6 p.m.). It is a combination of afternoon tea and dinner. Not the upscale repast it may sound like, high tea was the main meal for farming and working classes in Britain, comprising a main dish (generally roast beef or leg of lamb), bread and butter, a pudding (pastry or custard) and tea. Sometimes called meat tea, it is a world away from the fashionable world of afternoon tea enjoyed by the upper classes. (In a seemingly ironic reverse of terms, afternoon tea is sometimes called “low tea” after the late afternoon feeling of low energy.)