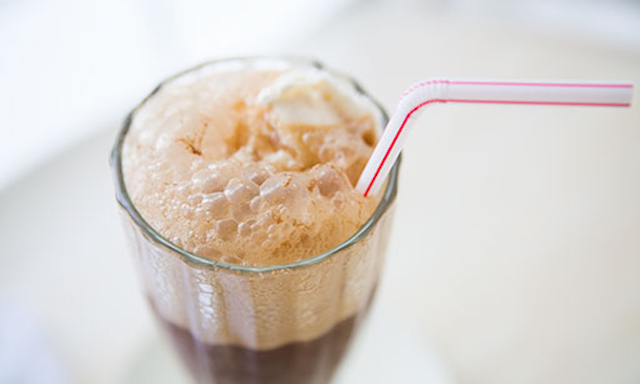 On August 6, float a scoop of vanilla ice cream in an ice cold mug of frothy root beer.

Also known as the “Black Cow,” the root beer float got its start in Colorado in a mining camp. Frank J. Wisner of Cripple Creek, Colorado, gets the credit for inventing the “Black Cow”  way back in August of 1893.
One night Wisner, owner of the Cripple Creek Cow Mountain Gold Mining Company, was staring out the window and thinking about the line of soda waters he was producing for the citizens of Cripple Creek when he came upon an idea.  The full moon that night shined on the snow-capped Cow Mountain and reminded him of a scoop of vanilla ice cream.  He hurried back to his bar and scooped a spoonful of ice cream into the children’s favorite flavor of soda, Myers Avenue Red Root Beer. After trying, he liked it and served it the very next day.  It was an immediate hit.
Wisner named the new creation, “Black Cow Mountain” but the local children shortened the name to “Black Cow”.
Since its inception, thousands of root beer floats have been enjoyed around the country each day.
HOW TO OBSERVE
Gather up some root beer and ice cream and mix up the perfect root beer float. Enjoy a root beer float over lunch or dinner at your favorite restaurant.  Use #RootBeerFloatDay to post on social media and spread the word.
HISTORY
Within our research, we were unable to identify the creator of National Root Beer Day.