Mother’s Day Here and Abroad...how it all began 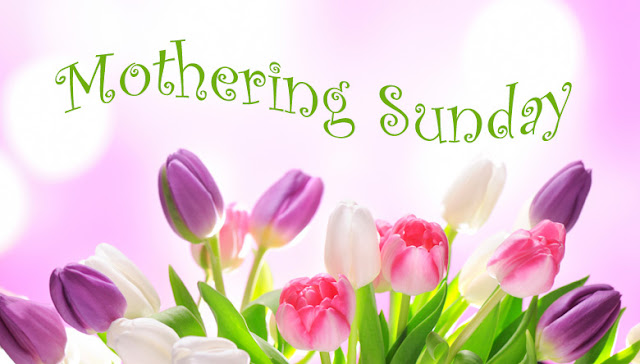 Mother’s day is fast approaching both here and abroad.  We all take this “holiday” for granted.  It was not that long ago in the scope of things when the second Sunday in May was just that, the second Sunday in May.
In the United Kingdom and Ireland Mother’s Day or Mothering Sunday is celebrated on the fourth Sunday in Lent  (the 40 day period leading up to Easter) in honor of Mary, the mother of Christ.  The history as well as the date are completely different than in the USA and other countries, even though customs are now similar.
Mothering Sunday goes back to the time of early Christians in England.  Some believe that the ceremonies in honor of Roman mother goddess, Cybele were adopted by the early church to worship Virgin Mary.  Others say the Mother Church was substituted for Mother Goddess and according to a custom a person visited the church of his/her baptism (Mother Church) on this day.
The origin of Mothering Sunday can also be traced to times when people in England as a tradition visited their nearest parish called, "Daughter Church" on every Sunday. In the 1600s, children after the age of ten left their homes for jobs as apprentice or domestic servants. It was considered important by the people that these children be allowed to visit their home and mother church once a year. Accordingly, in the middle of the Lent the children were given a leave by their employers to visit their "Mother Church" or Cathedral of their hometown. These children on their visit to their homes brought along gifts, flowers and special cakes for their mothers. The visits became a time for family reunions and over a period time, this holiday was stretched to include all mothers and was named as Mothering Sunday.
One of the earliest historical records celebrating a Mother deity can be found among the ancient Egyptians.  They held an annual festival to honor the goddess Isis.  Isis is commonly regarded as the Mother of the pharaohs. After her brother/husband Osiris was slain and dismembered in 13 pieces by their jealous brother Seth, Isis re-assembled Osiris’ body and used it to impregnate herself. She gave birth to Horus, whom she was forced to hide amongst the reeds lest he be slaughtered by Seth. Horus grew up and defeated Seth, and then became the first ruler of a unified Egypt. Thus Isis earned her stature as the Mother of the pharaohs.
In Rome and Asia Minor, Cybele was the major Mother deity.  In Greece Rhea was the mother of the Gods including Zeus. In many aspects, this Mother goddess was represented and celebrated similarly across cultures.
Julia Ward Howe was the first to propose Mother’s Day for the United States in 1870.  She wrote the lyrics in the form of a poem for The Battle Hymn of the Republic. Julia was so sickened by the death and carnage of the Civil War that she called on all mother’s to come together and protest the futility of their sons killing the sons of other mothers. She called for an international Mother's Day celebrating peace and motherhood with the following:
Arise, then, women of this day!
Arise all women who have hearts,
Whether your baptism be that of water or of tears
Say firmly:
"We will not have great questions decided by irrelevant agencies,
Our husbands shall not come to us reeking of carnage,
For caresses and applause.
Our sons shall not be taken from us to unlearn
All that we have been able to teach them of
charity, mercy and patience.
"We women of one country
Will be too tender of those of another country
To allow our sons to be trained to injure theirs."
From the bosom of the devastated earth a voice goes up with
Our own. It says, "Disarm, Disarm!"
The sword of murder is not the balance of justice!
Blood does not wipe out dishonor
Nor violence indicate possession.
As men have of ten forsaken the plow and the anvil at the summons of war.
Let women now leave all that may be left of home
For a great and earnest day of counsel.
Let them meet first, as women, to bewail and commemorate the dead.
Let them then solemnly take counsel with each other as to the means
Whereby the great human family can live in peace,
Each bearing after his own time the sacred impress, not of Caesar,
But of God.
In the name of womanhood and humanity, I earnestly ask
That a general congress of women without limit of nationality
May be appointed and held at some place deemed most convenient
And at the earliest period consistent with its objects
To promote the alliance of the different nationalities,
The amicable settlement of international questions.
The great and general interests of peace.
The holiday ended only 3 years later, except in Boston after Julia stopped funding the celebrations.
Mother’s Day Here and Abroad...how it all began
The call for Mother’s Day was taken up again in 1908 by Anne M. Jarvis to commemorate her mother, a long time Sunday school teacher at St. Andrew’s Methodist church in Grafton West Virginia.  The tradition of giving white carnations for deceased mothers and red or pink for living mothers was born.  By 1909 46 states as well as cities in Mexico and Canada were celebrating Mother’s Day on the second Sunday in May.  Jarvis protested the commercialism of the holiday and tried to have the canceled to no avail.  Ironically she died penniless with out knowing the Florist's Exchange had anonymously paid for her final care.