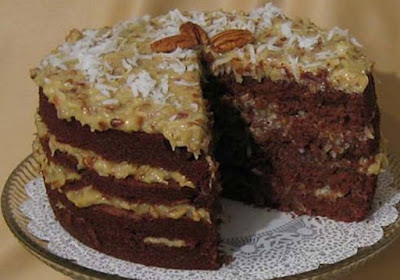 German Chocolate Cake is an American creation that contains the key ingredients of sweet baking chocolate, coconut, and pecans. This cake was not brought to the American Midwest by German immigrants. The cake took its name from an American with the last name of "German." In most recipes and products today, the apostrophe and the "s" have been dropped, thus giving the false hint as for the chocolate's origin.
1852 - Sam German (1802-1888) created the mild dark baking chocolate bar for Baker's Chocolate Company in 1852. The company named the chocolate in his honor - "Baker's German's Sweet Chocolate."
1957 -The first published recipe for German's chocolate cake showed up in a Dallas Morning Star newspaper on June 13, 1957 as Recipe of the Day. The recipe came from a Texas homemaker, Mrs. George Calay. The cake quickly gained popularity and its recipe together with the mouth-watering photos were spread all over the country. America fell in love with German Chocolate Cake.
The possessive form (German's) was dropped in subsequent publications, thus creating the name German Chocolate Cake that we know today and giving the false impression of a German origin.