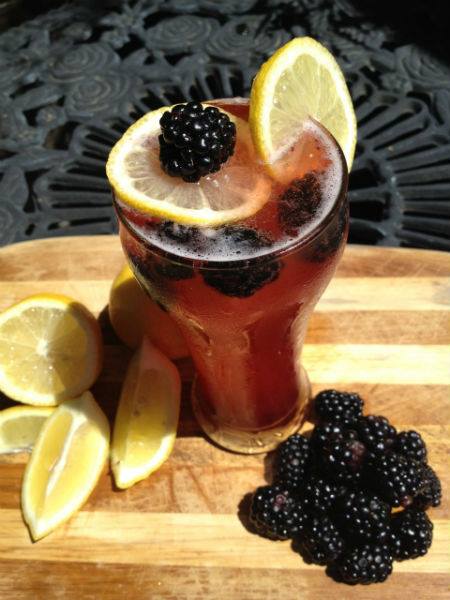 Summer is upon us and nothing quite beats the heat like a bright, refreshing and effervescent adult beverage.
Originally called a Shandygaff, the Shandy has been around in Europe for several centuries. Originating in England, the Shandy is also very popular in Germany and Austria, where it is known as a Radler.


The original Shandy recipe is a mixture of beer and lemonade, but the term now represents a category of drinks consisting of beer mixed with citrus-flavored soda, carbonated lemonade, ginger beer, ginger ale or cider.
Although a typical Shandy mixes lemonade and beer in a 50/50 proportion, I chose to prepare this particular Shandy more like a cocktail. The base of the recipe is a concentrated blend of lemon juice, agave nectar and muddled blackberries—one of my favorite berries, which are in season right now (yay!).
The mix is shaken and double strained over ice to remove any seeds, then topped off with a crisp lager or pilsner, like Pabst Blue Ribbon.
Ingredients (Serves 1)
4 large blackberries
2 ounces fresh-squeezed lemon juice
1 ounce agave nectar
8 ounces lager beer
Method
Muddle the blackberries with the agave nectar in the bottom of a cocktail shaker. Add the lemon juice and shake vigorously with ice for five seconds. Double strain the mixture into a glass over ice and top off with the beer.
Have you ever made a Shandy? What’s your special twist?