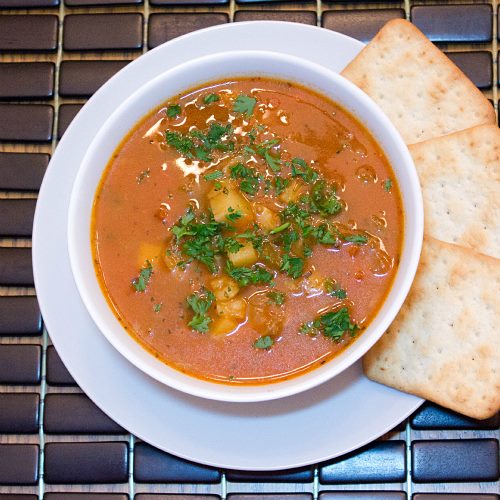 As with many recipes, the precise origin of Manhattan clam chowder is difficult to determine. It is believed the first restaurant to serve it was the legendary Delmonico’s in New York. In 1889, Delmonico’s chef du maison Alessandro Filippini wrote down the first known recipe for what would become Manhattan clam chowder in his cookbook; The Table: How to Buy Food, How to Cook It, and How to Serve It. Here is his recipe word for word, we've added the list of ingredients.
6 Medium Potatoes
1 Medium Onion
1/4 Bunch of Parsley
2 Stalks Celery
Pinch Salt
1 Tablespoon Butter
Slice of Pork
1 Medium Tomatoes
24 Medium Clams with liquid in separate bowl
Salt Spoon Black Pepper (about 1/4 teaspoon/1ml)
1 Tablespoon/15ml Worcestershire Sauce
2 Pilot Crackers or Gluten Free Crackers
Wash six fine, medium sized potatoes, peel and cut them into small dice-shaped pieces, wash again in fresh water, take them up with a skimmer; place them in a stewpan large enough to hold three quarts. Immediately add two quarts of cold water (not placing the pan on the fire until so mentioned.) Peel one medium sized, sound onion, chop it up very fine, and place it on a plate. Take a quarter of a bunch of well-washed parsley greens (suppressing the stalks), place it with the onions; wash well two stalks of soup celery, chop it up very fine, place it with the parsley and onions, and add all these in the stewpan. Place the pan on a brisk fire. Season with a light pinch of salt, adding at the same time a light tablespoonful of good butter. Let all cook until the potatoes are nearly done; eighteen minutes will be sufficient. Cut from a piece of fresh pork, CROSSWISE, one slice a third of an inch thick, then cut it in pieces a third of an inch square, fry, and reduce it in a pan on the hot stove for four minutes. Add it to the broth, add also three-quarters of a teaspoonful of branch dry thyme. Lightly scald four medium-sized tomatoes, peel and cut them into small pieces and add them to the preparation. Open and place in a bowl twenty-four medium-sized, fine, clams; pour into another bowl half of their juice. Place the clams on a wooden board, cut each one into four equal pieces, and immediately plunge them into the pan with the rest; gently mix so as to prevent burning at the bottom while boiling, for two minutes. Range the pan on the corner of the stove to keep warm. Season with a saltspoonful black pepper, one tablespoonful of Worchestershire sauce, gently stir the whole with a wooden spoon; break in two pilot crackers in small pieces stir a little again. Leave two minutes longer in the same position, but under other circumstances allow to boil. Pour into a hot soup-tureen, and serve.
personal chefs and event catering
Miami + Miami Beach + Fort Lauderdale + Palm Beach
www.yadachef.com