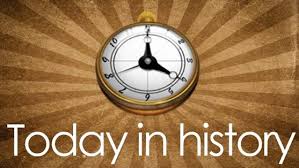 On this day in:

1709 Samuel Johnson, dictionary author, was born. I have read somewhere that he served his cat fresh shucked oysters.

1838 The Anti-Corn Law League was founded in Great Britain by Richard Cobden. The Corn Laws levied tariffs on imported food, which raised food prices.
1851 The first edition of the ‘New York Times’ was published ('The New York Daily Times')

1883 Elmer Maytag was born. Founder of the Maytag Co., washing machine manufacturer. One of his descendants was Fred Maytag II, whose Maytag Dairy Farms manufactures Maytag Blue Cheese.
1910 Ray Geiger was born (died April 1, 1994).  Editor of the Farmers' Almanac from 1934-1993, and editor of American Farm & Home Almanac from 1964-1990.
1927 Al Lapin Jr. was born (died June 16, 2004).  Entrepreneur and restaurateur, co-founder with his brother Jerry of International House of Pancakes in 1958 in Toluca Lake, California.

1952 ‘Jambalaya (On the Bayou)’ by Hank Williams was #1 on the Country Charts.
1990 A 500 pound, 6 foot high Hershey Chocolate Kiss was put on display at Times Square in New York City.
(Chocolate Trivia & Facts)

2009 The animated movie 'Cloudy with a Chance of Meatballs' opened in U.S. theatres. A clumsy inventor's gadget causes food to fall from the sky like rain.
2010 'Pretty Good at Drinkin' Beer' by Billy Currington was #1 on the Country Charts.
http://www.foodreference.com/html/html/september18.html