Try the Mediterranean Approach to Your Diet 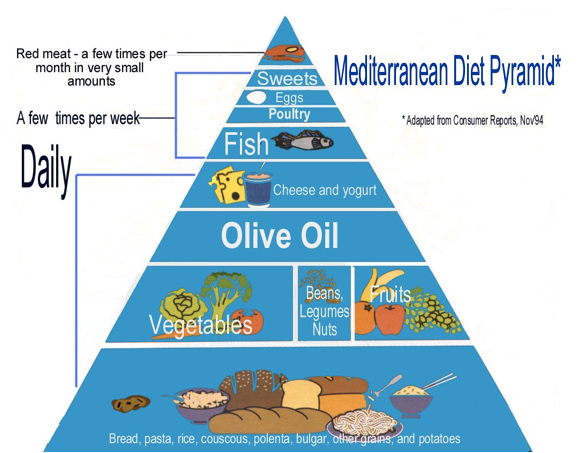 If you are looking for a heart-healthy eating plan, the Mediterranean-styled diet might be right for you. A Mediterranean diet incorporates the basics of healthy eating — plus a splash of flavorful olive oil and perhaps a glass of red wine — among other components characterizing the traditional cooking style of countries bordering the Mediterranean Sea.
Most healthy diets include fruits, vegetables, fish and whole grains, and limit unhealthy fats. While these parts of a healthy diet remain tried-and-true, subtle variations or differences in proportions of certain foods may make a difference in your risk of heart disease.
Benefits of the Mediterranean-Styled diet
Research has shown that the traditional Mediterranean diet reduces the risk of heart disease. In fact, a recent analysis of more than 1.5 million healthy adults demonstrated that following a Mediterranean diet was associated with a reduced risk of overall and cardiovascular mortality, a reduced incidence of cancer and cancer mortality, and a reduced incidence of Parkinson's and Alzheimer's diseases.
For this reason, most if not all major scientific organizations encourage healthy adults to adapt a style of eating like that of the Mediterranean diet for prevention of major chronic diseases.
Given how hard it is to study the effect of food on long-term health, there probably won’t ever be a definitive study of red meat and mortality. The evidence that’s accumulating has us believing that less meat is probably better for health.
Keep in mind that there’s no such thing as the Mediterranean diet. Instead, there are many ways to go Mediterranean. Here are the basics:
Cutting back on meat can also help the health of the planet. According to an eye-opening book from the Union of Concerned Scientists called The Consumer’s Guide to Effective Environmental Choices, meat consumption is the second most environmentally expensive consumer activity, behind how we transport ourselves from place to place. Making one pound of beef for the table creates 17 times more water pollution and 20 times more habitat alteration than making its caloric equivalent in pasta.
That makes eating less meat an excellent two-fer.