Easter As We Know it Today - A Brief History

Easter is one of the major religious holidays for Christians; at least, it is now.  Easter was not widely celebrated until after the Civil War. Easter is preceded by the 46 days of Lent, the time of thought and sacrifice for celebrating Christians.  Most people think of Lent being 40 days, but Sundays are excluded because no fasting or sacrifice is to take place on the Sabbath (day of rest). The Friday before Easter Sunday Christians call “Good Friday” and it commemorates the crucifixion of Jesus.  On Easter Sunday it is the celebration of the “Rising of the Lord” from the dead. This marks the end of fasting sacrifice. Every type of food can be eaten.

What does all of that have to do what most people think of as Easter and its traditions?

Most Christian holidays, including Easter, have a secular side. The dichotomous nature of Easter and its symbols is not necessarily a modern fabrication.

Easter has always had its non-religious side. Easter was originally a pagan festival. It was adopted by Christian missionaries starting in the second century CE.

The ancient Saxons celebrated the return of spring with a raucous festival commemorating their goddess of offspring and of springtime, Eastre. When the second-century Christian missionaries encountered the tribes of the north with their pagan celebrations, they attempted to convert them to Christianity. They did so, however, in a clever manner. It would have been difficult for the converts to celebrate their holy days with observances that did not coincide with celebrations that already existed. To save lives, the missionaries decided to spread their beliefs slowly throughout the populations by allowing them to continue to celebrate pagan feasts, but to do so in a Christian manner.

As it happened, the pagan festival of Eastre occurred at the same time of year as the Christian observance of the Resurrection of Christ. It made sense to alter the festival itself, to make it a Christian observance as pagans were slowly converted. The early name, Eastre, was eventually changed to its modern spelling, Easter.

The Easter Bunny is not a modern invention. The symbol originated with the pagan festival of Eastre. The goddess, Eastre, was worshipped by the Anglo-Saxons through her earthly symbol, the rabbit, because of its fertility and renewal of life.  The Germans brought the symbol of the Easter rabbit to America.

The exchange of eggs in the springtime is a custom that is centuries old.  From the earliest times, the egg was a symbol of birth in most cultures. Eggs were often wrapped in gold leaf or, if you were a peasant, colored brightly by boiling them with the leaves or petals of certain flowers.  The use of eggs was forbidden during Lent. They were brought to the table on Easter Day, coloured red to symbolize the Easter joy. Many Greek dye them red as a symbol of the blood of Christ

We continue the practice today with children having Easter egg hunts, and receiving baskets full of chocolate or jelly bean eggs  along with eating a chocolate symbol of the bunny that brought them.

Lamb is often served as an Easter food symbolizing the “Paschal” sacrifice.  Ham is also an important modern day symbol. The practice is partially from the the thoughts that pigs are a symbol of good luck (they cannot look backwards, only forward), and from the time when after a long winter the cured meats were the last to be consumed just before the beginning of springtime and renewal. 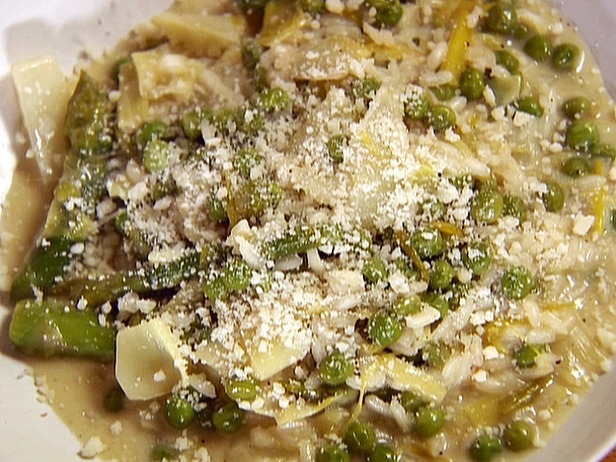 In a heavy pot melt half the butter over medium heat and add olive oil and shallot. In a separate pot heat the stock to medium. Sweat shallot for about 2 minutes then add garlic 30 seconds. Add rice and cook, stirring regularly for 2 minutes. Add white wine and stir until the rice has absorbed.  Start adding stock a 1 cup at a time until absorbed about 5 minutes. Making sure to stir every couple of minutes. When risotto is almost done (still a firm bite). Stir in asparagus for 3 minutes then add peas. Keep stirring and adding stock as necessary. Start tasting and adjusting your seasoning. When just al dente stir in mint, cheese, lemon juice, and remaining butter. Taste and correct again. Serve immediately.
*substitute with vegan butter.  Olive oil does just fine