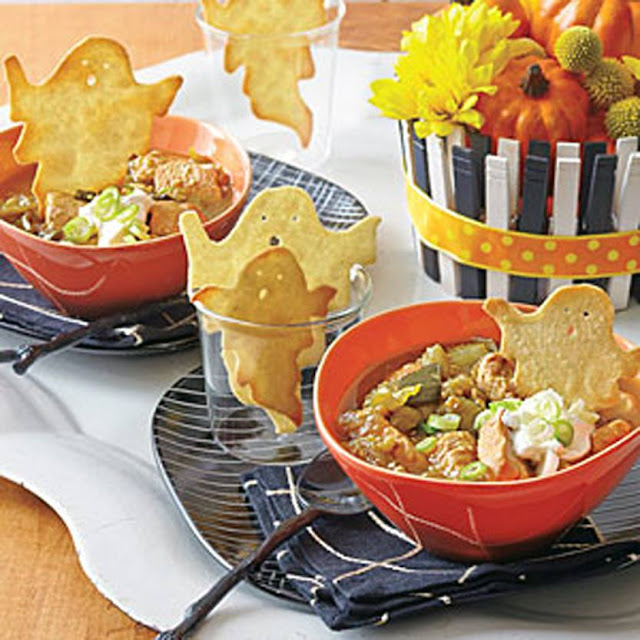 Have some fun with your food this Halloween! This cozy chili is made in a slow-cooker, so all you have to do is roast the tomatillos and add everything to the pot. Don't forget the tortilla ghosts!
Ingredients:
2 pounds tomatillos, husked
3 tablespoons canola oil, plus more for tortillas
3 pounds boneless, skinless chicken breast halves, cut into 1-inch pieces
Salt and pepper
1 white onion, chopped
6 cloves garlic, smashed
2 pounds Cubanelle peppers, seeded and chopped
2 poblano peppers, seeded and chopped
1 tablespoon cumin
1 cup low-sodium chicken broth
2 tablespoons packed light brown sugar
1 tablespoon lime zest
8 white corn or flour tortillas
1 cup sour cream
4 scallions, sliced
Preparation:
1. Place oven rack on highest position and preheat broiler. Place tomatillos on a baking sheet and rub with 1 tsp. oil. Broil tomatillos, turning occasionally with tongs, until skin blisters, about 10 minutes. Allow to cool slightly. Chop and place in a large (6- to 7-quart) slow cooker.
2. Pat chicken dry and sprinkle with salt and pepper. Warm 2 Tbsp. oil in a large skillet over medium-high heat. Working in batches, brown chicken on all sides, about 5 minutes per batch. Transfer browned chicken to slow cooker.
3. Add 2 tsp. oil to skillet. Add onion, garlic, both peppers and cumin, season with salt and pepper and cook, stirring occasionally, until onions and peppers begin to soften, about 10 minutes. Add chicken broth, sugar and lime zest and cook for 2 minutes, stirring and scraping up any browned bits from bottom of pan. Pour mixture over chicken in slow cooker. Cover and cook on low until chicken is tender and vegetables are very soft, 6 to 7 hours. Season with more salt and pepper, if desired.
4. Preheat oven to 350°F. Line a baking sheet with parchment. Use a sharp paring knife or a cookie cutter to cut ghost shapes out of tortillas. Brush about 1 tsp. oil on both sides of tortillas and place on prepared baking sheet. Bake until crisp, about 15 minutes. Remove from oven, then sprinkle with salt. Serve chili with sour cream, scallions and tortilla ghosts.
personal chefs and event catering
Miami + Miami Beach + Fort Lauderdale + Palm Beach
info@yadachef.com | 954-367-YADA (9232)
www.yadachef.com