An Appalachian Witch Forager on the Magic of Plants 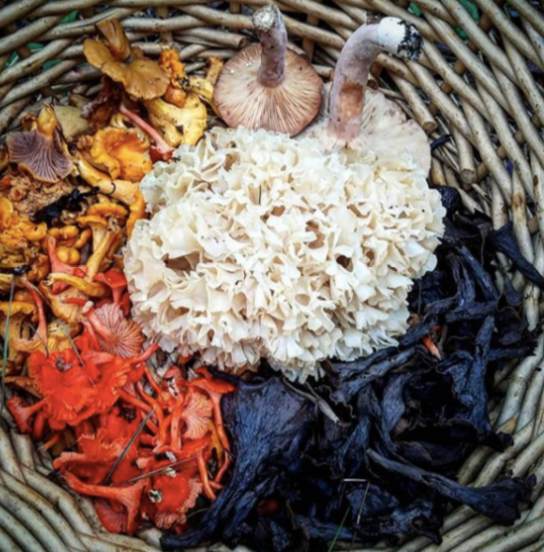 Rebecca Beyer forages through the lenses of folk magic and plant lore.

On a cool summer morning a few years ago, I joined a group of strangers and followed Rebecca Beyer, a witch and forager, through a lush green forest in Asheville, North Carolina. As we traversed the woodland and crossed over creeks, we nibbled on tart wood sorrel leaves, learned to identify violets by their heart-shaped greens, and sliced red-lacquered reishi mushrooms off the sides of tree trunks.

We were on a foraging tour in the Southern Appalachians organized by No Taste Like Home, and Beyer, who’s now 33, was our erudite guide. With ornate tattoos peeking out from under her earth-toned clothing, she explained what edible plants were endemic to the region, and the folklore and history behind them. She also sprinkled in stories about magic spells that have been used with the local flora over the last few centuries.

“[Plant] lore has kind of been cut out of foraging because now we come at it from a scientific and nutritive perspective,” Beyer said during one of our conversations over the years. “The story of a plant actually preserves really important historical context or facts.”

For Beyer, foraging, plant lore, and folk magic are all connected. One of her favorite plants to forage in the Appalachians is the fragrant sassafras tree. In the area’s folk magic practices, sassafras root is put into a pouch and hung around the neck to keep illness away. In the spring, it’s made into a tonic to cleanse the liver and get the blood moving. In Appalachian folk medicine, blood is like the sap of a tree in your body: It’s thick in the winter and thin in the summer, according to Beyer.

“When you know that [information], it grounds you into that experience, in that moment, in that place, instead of just [saying], ‘Well, here's a catalog of plants in the world you can eat. Here’s what you can do with them,’” Beyer said. “But [when you tell the] story of the plant, I feel it [adds] an extra dimension.”

Beyer described Appalachian folk medicine and magic as a stool with three legs made up of Native people, Africans, and Europeans. “A lot of West Africans came to this area through slavery, and their religious world views and unique spiritualities from hundreds of different formations within that area affected the Native Americans, the Germans, Scotch, Irish, and all the different settlers,” she said. “Together, [it] created this interesting mash-up that is Appalachian folk magic.”

Another prevalent plant foraged in the Appalachians around the region’s waterways is sochan (a.k.a. the green-headed coneflower). The yellow-flowered perennial, which is closely related to echinacea, has long been a favorite food of the Cherokee people, Beyer explained. Traditionally, Cherokee women would gather sochan leaves and stalks, as they’re believed to be an iron-rich food that is nutritious for pregnant women. They would then parboil and fry the leaves, which taste like celery, in bear fat.

Beyer, who’s been a practicing witch since she was 12, approaches foraging with one foot in academia and the other in the mystical arts. She holds a bachelor’s degree in plant and soil science and a master’s in Appalachian studies and sustainability. She’s using her research in the region’s ethnobotany to write a reference-style book about Appalachian folk magic. She also blogs about her research on her website, Blood and Spicebush.

As a teacher, Beyer co-runs The Sassafras School of Appalachian Plantcraft, where she instructs classes on herbs and wild foods, and operates her own witchcraft school, which features courses on foraging and medicine-making. Beyer also happens to be a tattoo artist and specializes in plant drawings.

When Beyer teaches her students about foraging, she often tells them that whenever they use a native plant, it’s important to be respectful of its origins. Most of the knowledge behind how to use native plants in Appalachia exists because of indigenous people, she explained. “Especially like myself being a white-settler ancestor… if you're using plants from the land, in my opinion, I think it's irresponsible to not be doing something to promote the wellbeing of living Cherokee and Catawba people today,” she said. “And all people, obviously, but especially where you live, [it’s important to] research what tribes were there.”

She encourages her students to donate to Native American food-sovereignty organizations when engaging with native plants. Beyer gives 15 percent of what she makes selling herbal medicine to the organization North American Traditional Indigenous Food Systems (NāTIFS). She also offers free classes to indigenous people and people of color.

When Beyer moved to Asheville a few years ago, she quickly fell in love with the city. She said she would have been happy living anywhere else in the Appalachian Mountains, like Tennessee or Virginia, but she felt more comfortable talking about being a witch in Asheville. She described it as a progressive city that is a “blue pond in a red sea.” “I think in Asheville, you can be more open about it, and talk about magic and witchcraft and things [like that] and people won't be like, ‘Oh my God, the devil,’” she said, adding that the devil isn’t even part of her beliefs.

The Appalachian Mountains, which are among the oldest mountains in the world, is a special place not just for folk magic, but also for having a unique ecosystem. According to the book Terrestrial Ecoregions of North America, “The large variety of landforms, climate, soils, and geology, coupled with a long evolutionary history, has led to one of the most diverse assemblages of plants and animals found in the world’s temperate deciduous forests.”

Like how the terroir of a land influences wine, Beyer feels that there’s a certain terroir to the spirit of the Appalachians. The French Broad River, believed to be one of the oldest in the world, runs from North Carolina to Tennessee and adds to the ancient magic thought to be pulsating through this region.

“When you tap into the spirit of those plants, you realize they're alive,” Beyer said. “They have their own identity, their own—we call it the ‘genius loci,’ ‘the spirit of a place.’ They have a type of gnosis, a type of knowing. And you can tap into that if you sit with a plant long enough. How did our ancestors figure out how to use plants? A lot of times they'll say the plants told them. And I really do think that they speak if you'll listen to them.”