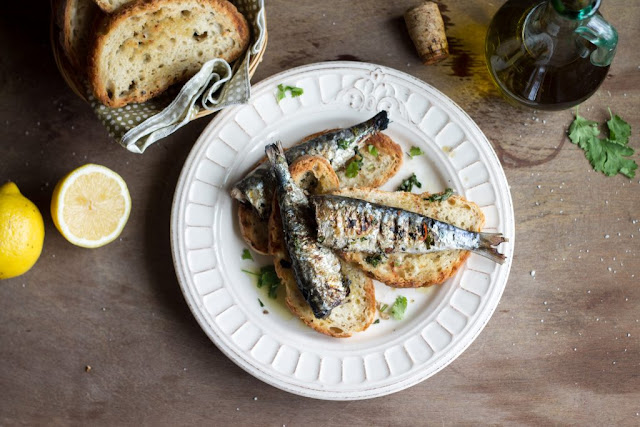 When we fire up our barbecues seeking that aromatic smoky and charred flavor, most people don’t consider one of the most sustainable and healthy fish for a grilling candidate; the sardine! A summer favorite, sardines are found all over Europe but have been expanding their delicious reach around the US in recent years.
One of the most loved ways to consume these little fish is to serve them hot off the grill with rustic bread. The thick slices of crusty bread are used not only as a utensil to transfer those little fish into hungry mouths, but also acts as vessels to capture all the rich juices as they seep into it.
Traditionally grilled sardines are made simple with only a sprinkle of salt and a hot flame for seasoning, but this recipe is made even more enjoyable with garlic, cilantro, a squeeze or two of lemon juice, and a bite of spicy red piri piri peppers!

Notes
If piri piri peppers are unavailable feel free to substitute with fresh cayenne or other hot peppers, or dried chili pepper flakes.
To keep the heat elevated from the piri piri peppers, skip removing the seeds and just thinly slice them.

STEP ONE – PREPARE THE SARDINES

Put the cleaned, gutted sardines into a shallow dish.

Crush the garlic with the flat of the knife, and mince. Rinse the cilantro with cool water and shake off excess drops. Roughly chop it on the cutting board and mix it with the garlic.

Lay the piri piri peppers on the cutting board and cut them lengthwise, then using the tip of the knife, scrape out the white part and seeds. Cut the peppers into thin ribbons. Be very careful not to touch the seeds or white part with bare hands, as they can cause a burning sensation on the skin.

Using your finger, open the sardines and stuff them with the garlic and cilantro mixture. Add in little bits of the cut peppers as well. Make sure there is some of the mixture and peppers left for the outside of the fish.

STEP FIVE – SEASON THE OUTSIDE OF THE SARDINES

Drizzle the olive oil over the sardines then add more of the garlic/cilantro/pepper seasoning on the outside. Sprinkle with salt and a squeeze of lemon. Turn the sardines over and repeat on the other side. Cover and allow to the flavors to marinate.

Prepare the charcoal grill or gas grill by oiling the grill grate and heating the grill on high or allowing it to reach a high temperature. You can check the heat by placing your hand a few inches above the flame, and if after a count to 5-6 it’s just become uncomfortable, it should be hot enough.

Lay the prepared sardines on the hot grill, allowing them to cook 3-4 minutes on each side. Char marks should have formed before turning them over and they will be done when poked they will feel fairly firm.  If checking with a thermometer, they should reach 145F.
Transfer the cooked sardines to a plate and cover with tented tinfoil to keep warm.

Drizzle more olive oil on one side of each slice of bread and lay them, oil side down on the grill. Allow them to cook 1-2 minutes or until marks form.

Lay the sardines on the grilled side of bread and serve immediately!
Grilled sardines are not only a deliciously healthy dish, but they are incredibly versatile when it comes to the components used to flavor them. If cilantro isn’t available, use anything from basil, to mint, to rosemary to make them more adaptable to the rest of your menu.  Don’t stop at serving them in the summer either! Serve them in the fall, the spring, even in the winter with the flash frozen varieties available year round.
What is your favorite way to eat sardines? Is it’s a grilled version like this, or something new and exciting? Please let us know!