Cider or Juice? It’s all APPLES to US!

In North America (the USA and Canada) we have a drink that is much loved called apple cider. Go anywhere else in the world and it will be known as unfiltered/natural apple juice.  Cider is what you get at a pub and goes great with a “ploughman’s lunch”.
It is the beginning of Autumn or Fall. The time when brisk winds begin to blow the leaves once brightly coloured leaves from the trees.  It is also apple picking time in the Northeast.
Cider or cyder, according to Wikipedia, is a fermented alcoholic beverage made from fruit juice, most commonly and traditionally apple juice. Cider varies in alcohol content from 1.2% to 8.5% or more in traditional English ciders. In some regions, such as Germany and United States, cider may be called "apple wine".
In the United States and some parts of Canada, the term "hard cider" usually refers to the alcoholic beverage discussed in this article, while "cider" may refer to non-alcoholic apple cider. When sugar or extra fruit has been added and a secondary fermentation increases the alcoholic strength, a cider is classified as "apple wine".
Within the US, the distinction between apple cider and juice isn't always clear. 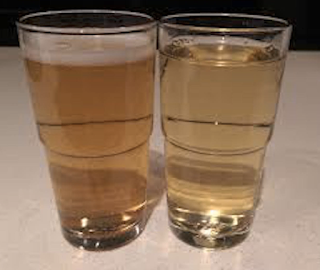 When most of us think of apple cider, we probably picture an opaque, highly perishable apple drink available at farm stands and markets in the autumn. It is juice, but unfiltered and usually unpasteurized. Unpasteurized apple cider has naturally occurring yeasts that can cause fermentation, making the drink slightly fizzy and alcoholic over time.
Some states spell out a distinct difference between apple cider and juice. In Massachusetts the Department of Agriculture states that "Fresh cider is raw apple juice that has not undergone a filtration process to remove coarse particles of pulp or sediment .... Apple juice is juice that has been filtered to remove solids and pasteurized so that it will stay fresh longer."
Throughout the UK, Europe and beyond, apple beverages that are not alcoholic are referred to as “juice”.
Apples it seems have been around for a long time.  History shows that apple trees existed along the Nile River as early as 1300 BC, but whether or not a drink was ever produced from the fruit is unclear.
The Romans arrived in England in 55 BC.  It is reported that they found the local Kentish villagers drinking a delicious cider-like beverage made from apples. According to records, Julius Caesar was a big fan and embraced the pleasant pursuit with enthusiasm. It is unclear how long the locals had been making this apple drink prior to the arrival of the Romans.
By the ninth century, cider  was a common drink throughout Europe and is even a reference made by Charlemagne confirms its popularity. After the Norman Conquest of 1066, cider consumption became widespread in England and orchards were established specifically to produce cider apples. During medieval times, cider making was an important industry. Monasteries were suppliers of vast quantities of their strong, spiced cider to the public. Farm laborers received a cider allowance as part of their wages, and the quantity increased during haymaking. English cider making peaked around the mid seventeenth century, when almost every farm had its own cider orchard and press. Cider regained its popularity during the twentieth century, but demand was largely for the mass-produced variety. Only in recent years has traditional cider making finally triumphed with micro-breweries beginning to once again pop up. Traditional cider making is experiencing a major resurgence in both America and Europe.
American history is a bit different.  It was of course the English settlers who introduced cider by bringing the seeds for cultivating cider apples. During the colonial period, grains did not thrive well and were costly to import. Apple orchards on the other hand were plentiful, making apples cheap and easily obtainable. As a result, hard cider quickly became one of the colony’s most popular beverages. Consumption of cider increased steadily during the eighteenth century, due in part to the efforts of the legendary Johnny Appleseed, who planted many apple trees in the Midwest.
A series of events led to cider''s fall in popularity. The introduction of German beer with its faster fermentation process quickly made beer popular because German immigrants were able to set up large breweries for producing great quantities of beer. The production of apple cider was still limited to small farms. Then came the  religion based Temperance movement which cost many church-going/God fearing farmers the libation. Many even went as far as to chop down their apple trees. This was followed by Prohibition, and pretty much destroyed the market for apple cider.

Today, with the growing popularity of microbreweries, the tide has turned.